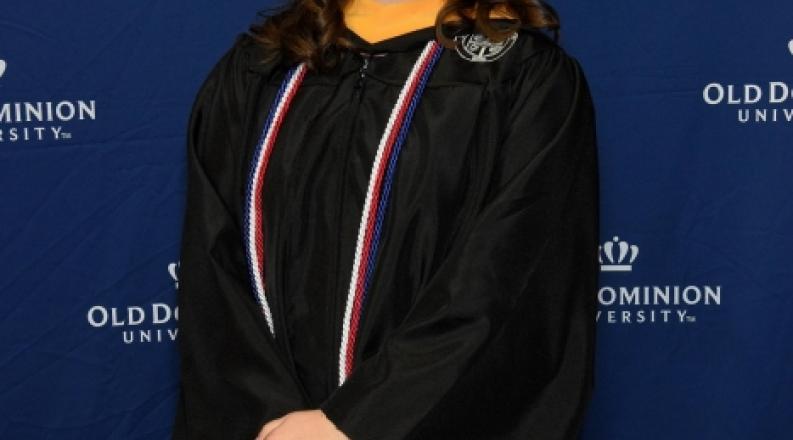 Newlywed Ruth Archambault graduated from Old Dominion University on Saturday, May 6, along with her husband Seth Green. Archambault received a Bachelor of Science in ocean and earth sciences (OES) with a concentration in geology and a minor in military leadership. She'll tell anyone willing to listen that "studying geology is more than looking at the ground and identifying rocks," and she believes her degree and military background will help leverage her career.

Before coming to ODU, Archambault wanted to follow in the footsteps of her high school mentor who was her senior naval science instructor at Landstown High School in Virginia Beach, VA. Her mentor was a retired commander in the Navy who flew E-2C Hawkeyes and was an alumnus of ODU who matriculated through the university's ROTC program. While in high school Archambault was a cadet in the Navy Junior ROTC (NJROTC) program. "I want to be a pilot, I want to fly 2C Hawkeyes as he did," said Archambault-Green. "So, ODU seemed like a great place to do that given he was so successful going through that program."

Through the NROTC, she moved from a fourth-class Midshipman to a first-class Midshipman. Managing her time and schedule would take discipline. "NROTC was my job on top of the homework assignments that normal college students had to complete. I had to wake up at 0'dark thirty, go workout or sit through training or do drills in the morning and then carry on through my normal day" said Archambault. "I was deprived of sleep, free time, and I didn't have social life outside of NROTC."

In order to meet the high requirements, all NROTC students must maintain good grades. "Juggling responsibilities was important. From day one, it was natural to me," said Archambault. "I was already exposed to the early mornings and late evenings, transitioning to college was pretty easy."

Her academic career started off with Archambault choosing to be a physics major, but she soon realized that was not her calling. "When I started doing some research on other options, I came across geology and that's when I decided that that was what I wanted to do," said Archambault. She's always had a love for geology. She would soon learn that majoring in geology in OES as the right choice because of her passion for it.

Going through the general education classes, Archambault found herself in relatively large classes. She ended up in OES Associate Professor Matthew Schmidt's class. "Dr. Schmidt was an amazing geology teacher," said Archambault. "He had a separate class for people who were majoring in geology so that he could be more attentive answering questions and that's where it all started for me."

Archambault enjoyed her major so far, but during her junior year when she took sedimentology and stratigraphy with Professor Dr. Richard Hale she said, "I absolutely fell in love with this course and his teaching just motivated me to keep pursuing it." That was the real turning point for her. "I was like this is it, this is where I'm going to stay."

Following that semester, she continued with taking geomorphology in the spring and hydrogeology in the fall of 2021 with Dr. Joseph Tamborski. These classes exposed her to environmental consulting and gave her research experience studying four wells located off of Knitting Mill Creek in Norfolk. In addition, she was simultaneously conducting research in her Field Studies class with Professor and Eminent Scholar Greg Cutter and Professor Richard Zimmerman, as her instructors, taking water samples to study the Lafayette River in Norfolk.

Her advisor, Associate Professor Dreux Chappell said, "Ruth's definitely a go-getter and super smart." Chappell also noted that the OES chief departmental advisor had to adjust degree works to account for the advanced physics classes Archambault took instead of the standard ones.

Assistant Professor Rip Hale said, "Ruth is one of the most driven students I have had the pleasure of working with." Having a connection with professors made a difference for Archambault-Green as she progressed at ODU.

There were some challenges during her time at ODU and not having enough time in each day was difficult with her very demanding schedule. "I didn't have any 'me time', but I had tons of support, and it really helped being surrounded by other individuals who were going through the same things," said Archambault. "We could definitely look to each other to keep pushing, just having that extra support was very helpful."

Her faith is also the bedrock of her success. "I had God's and Jesus's help through it," said Archambault. "The prayers I prayed helped me through all of the challenges, especially staying up late, studying for tests and being able to succeed with limited sleep and get through it successfully."

Being able to combine her love for geology while preparing for her next move after graduation has been a dream come true for Archambault. To her, studying rocks is only the tip of the iceberg. "There's so much more to it," said Archambault. "You look at the ground and you say, that's a rock and that's it, but there's so much more to it and that's what I like about it."

Rock collecting is something that runs in her family, but again there's more to it than just selecting a rock. "My grandfather collected rocks, my parents collect rocks and when I used to live in Michigan, I collected Petoskey stones," said Archambault. "My husband and I like to travel and everywhere we go we add a rock to our little ledge collection in our apartment." There is a story behind each and every rock, and her grandfather did the same thing.

Her advice to incoming Monarchs is to speak up. "There are so many college students who refuse to talk to their professors, and they are terrified, but if only they knew how much more successful, they could be if they did, it would be so altering to their college career."

After graduation, she plans to come back to ODU for graduate school under Assistant Professor Tamborski's advisement.