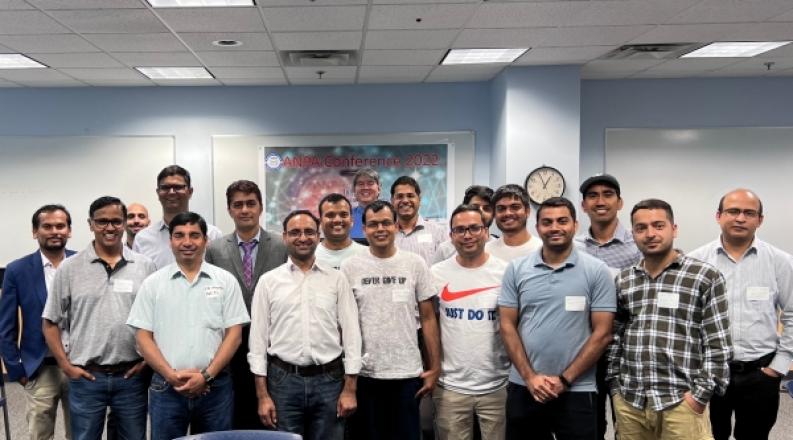 The Department of Physics in the College of Sciences at Old Dominion University hosted the fifth annual Association of Nepali Physicists in America (ANPA) Conference July 15-17, 2022. This year's conference was held in a hybrid format with more than 200 participants who joined remotely from across the United States, Nepal, India, and Japan. More than two dozen researchers attended the three-day conference in-person at ODU.

"The platform for the ANPA is to engage networking and collaborative efforts among researchers in the major area of physics research from around the world," said Dhakal.

Physics Department Chair Charles Sukenik, Ph.D. opened the on-campus session of the conference by welcoming participants. "We were delighted to partner with ANPA this year on their annual conference. The ODU Physics Department has a decades-long track record of attracting some of the best Nepali physics students to our program, so it was wonderful to be able to engage with ANPA on this conference," said Sukenik.

The keynote speaker was Qaisar Shafi, professor of Physics, University of Delaware. Prof. Shafi is a renowned physicist in the field of dark matter and dark energy, supersymmetry in the LHC era Higgs Boson and new physics at LHC, and origin of matter in the universe.

Prof. Shafi is also one of the principal organizers of the BCVSPIN (Bangladesh-China-Vietnam-Sri Lanka-Pakistan-India-Nepal), co-founded with Nobel Laureate Abdus Salam (Prof. Shafi's Ph.D. advisor), to allow young scientists living in underserved regions to engage in research. "The presentation by Prof. Shafi took us back in memory, when he showed several pictures from 1989 when Prof. Shafi organized a summer school with Nobel Laureate Abdus Salam (Nobel Prize in Physics, 1979) and Philip Warren Anderson (Nobel prize in Physics, 1977) in Kathmandu," said Dhakal.

The conference program consisted of the keynote, invited, and contributed talks as well as a special program focused on networking, the collaboration between the researchers, and engagement in research policymaking.

During the last day of the conference, the annual general meeting (AGM) was held. ANPA secretary and co-convener of conference Dr. Chandra Mani Adhikari summarized the yearlong ANPA activities and financial update.

Conference convener Dhakal said, "On behalf of the organizing committee, I would like to thank all of the scientific program committee members, session chairs, Webex in charge, presenters and participants for showing great enthusiasm and support for the successful conference. ANPA would like to thank the conference sponsors SAES group and Old Dominion University. "I'd like to thank all of the many volunteers and several ANPA members who assisted voluntarily with remote presentation that went smoothly. And a special thanks also goes to the Chair for providing the venue for the conference."

Since 2018, ANPA has been organizing an annual conference to share recent and cutting-edge scientific research as well as a platform to engage networking and collaborative efforts among the researchers in the major area of physics research.