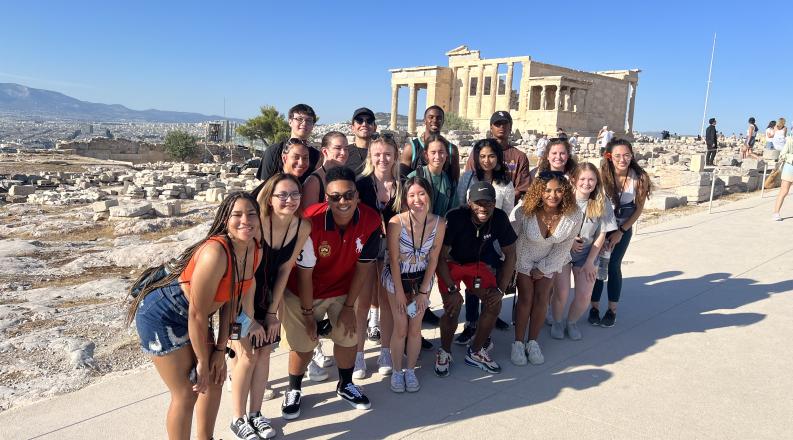 When you think of traveling to Athens, Greece, many would imagine touring ancient ruins and seeing first-hand the birth of a nation, but for 18 Old Dominion University students this was not their typical vacation. ODU's Global Medical Brigades chapter used their summer to engage with medical professionals in the field while helping Greeks and refugees in need of medical care.

After an 11 and a half-hour flight from Norfolk to Athens, jetlagged student brigadiers did not delay in working alongside various healthcare providers. ODU Global Medical brigadier's main task at hand was assisting and aiding clinics during an ongoing refugee crisis that has lasted nearly a decade in Greece.

In the morning, brigadiers split into two groups. One group would go to work assisting or shadowing in the clinic, while the other group would take tours of the city including the famous Greek landmarks such as the Parthenon. In the afternoon, the two groups would switch roles. In addition to aiding patients and doctors, the group organized care packages for refugees after they would leave the clinic. The groups also learned more about Greece through presentations.

For many of the 18 ODU students this was a transformative experience. "Everybody hears, 'Oh, there's a refugee crisis,' and their only exposure is through the news," said brigadier Michael Guye. "But to actually be in the clinics and see the families and children in need of care is something extremely eye-opening and doesn't compare." Guye worked alongside ophthalmologists helping to administer eye exams at a clinic.

During one clinic session, brigadier Kayli Hence was especially touched by a 10-year-old boy whom she was helping. "He came in with his mom that day, and I remember he spoke about four different languages," said Hence. "He was talking about how he wanted to become a doctor just like us when he got older." Hence was amazed to see everything he had learned and how far he had come at such a young age. "Considering I'm only 19 and haven't experienced half the things he has; I was blown away by his dreams and many high hopes."

Day to day tasks varied each day for other ODU student brigadiers. During the clinics, Jaden Garvin, a Public Health major, helped patients to check in for their appointments. "I took their refugee identification cards and wrote down the information to give to the data informatic volunteers who then used the information to fill out the medical forms so that they could see their doctors," said Garvin. She helped to assign refugees to doctors at the clinics, screened patients for COVID, and gave them supply bags when they left after their appointments. In addition, she also helped the pediatricians with cleaning the clinic beds between patient visits. "From this trip I have learned that it doesn't take much to help many people in need," said Garvin. "Making a small effort can have a big impact on someone's life."

ODU's student chapter of Global Medical Brigades is part of an international movement of students and medical professionals working alongside local communities and staff to implement sustainable health systems. They have previously worked in remote, rural, and under-resourced communities in Honduras, Panama and Nicaragua that would otherwise have limited to no access to health care. Each community receives a brigade every three to four months where hundreds of patients are provided access to healthcare and volunteers deliver public health workshops.

ODU Medical Brigades' is already scheduled to leave for Ghana in July. To donate to our brigadier's next endeavor in Ghana for 2023, please visit: