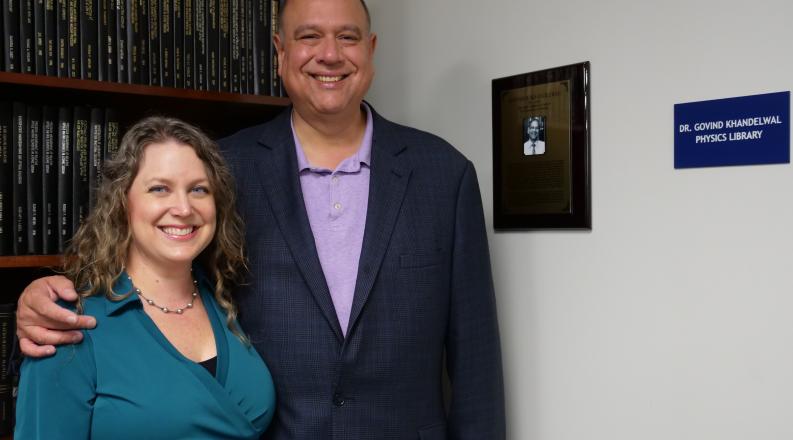 On Thursday, November 17, current and emeritus faculty gathered on the second floor of the Physical Sciences Building to dedicate the Govind S. Khandelwal Library and the Dr. Govind Khandelwal Student Lounge. More than 50 students, faculty, staff, and friends of the Khandelwal family gathered to dedicate this one-of-a-kind library collection.

Professor Emeritus Govind S. Khandelwal, Ph.D., was a long-term physics faculty member, before retiring in 1997 after 28 years at Old Dominion. Khandelwal was extremely well-liked and even more well-respected. In 2020, Khandelwal passed away.

Michael chose not to have the endowment named after his father, but rather to have two spaces in the Physics Department named for him:

These spaces will benefit students in many ways, carrying on Dr. Khandelwal’s legacy and passion for student development. Michael’s choice in naming the spaces was a way of commemorating the passionate his father had for helping students have an excellent experience at ODU.

The event was held to officially dedicate the two spaces. It included a tour of the physics facilities, short remembrances by current and former faculty, former students of Professor Khandelwal and of course, his son. Michael is executive director of the Muse Writers Center located in Norfolk and he said he became a writer because his father encouraged that interest in him.

"Govind was instrumental in establishing the Ph.D. program," says Gail Dodge, Dean of the College of Sciences. "He was a successful researcher and dedicated teacher, but he especially enjoyed teaching introductory physics."

Below are the words on a plaque dedicated to and in remembrance of Professor Khandelwal:

“Dr. Govind S. Khandelwal joined the faculty of Old Dominion University in 1966 as an Assistant Professor of Physics. In 1975 he was promoted to Full Professor. That same year, he was honored with the designation Eminent Scholar. Dr. Khandelwal specialized in atomic and nuclear physics. Throughout his distinguished career as a researcher and a teacher, Dr. Khandelwal was honored with three awards from NASA for creativity and innovation in research (1976, 1982, 1990). He also received the Old Dominion University Faculty Research Achievement Award (1989), the University’s highest award for research accomplishment. In addition to 72 research articles, his passion for teaching led to the publication of 8 articles in refereed pedagogical journals in physics and he received the University’s Most Inspiring Faculty Award (1994). Dr. Khandelwal made numerous contributions to the Physics Department and was especially recognized for his excellent service as Graduate Program Director and Director of Graduate Admissions. Govind S. Khandelwal was a native of India, earning a B.S. degree (First Class with Honors) in 1954, a Master of Science in Applied Math degree (First Class) and a Master of Science in Physics degree (First Class) in 1959, all from Bombay University. In 1960, he came to the United States to enroll as a graduate student at the University of North Carolina at Chapel Hill. He did his research in theoretical atomic physics under the guidance of Professor Eugen Merzbacher, earning an M.S. in Physics in 1963 and a Ph.D. in Physics in 1966.”