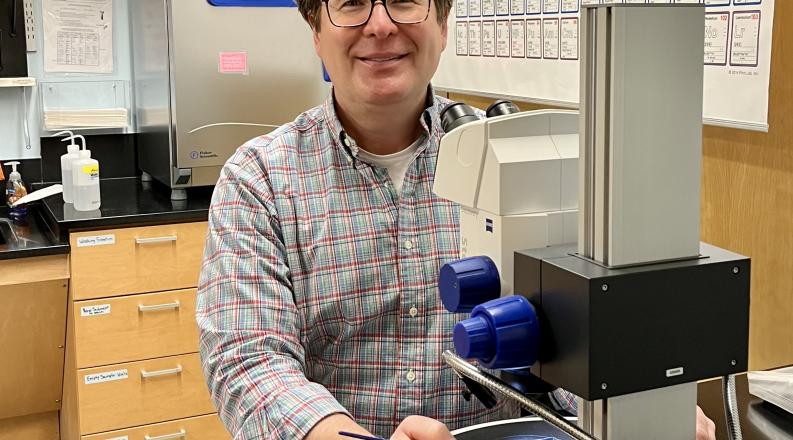 Old Dominion University's Ocean & Earth Sciences associate professor Matthew Schmidt just received a $320,219 grant from the National Science Foundation (NSF) to explore a new approach to reconstructing past climate change. Over the next three years, his research team will develop and test a new method to reconstruct past ocean surface salinity variability, allowing scientists to extend existing records of salinity beyond the limit of instrumental records. "These reconstructions are needed to understand how ocean and atmospheric circulation patterns changed in the past under different climate states and to help scientists predict how the climate system will evolve in the future," said Schmidt.

This project could be a game-changer in the field because of the new way Schmidt and his team will utilize the ocean's salinity. Based on preliminary results generated by Schmidt's graduate student Colton Watkins, the amount of sodium incorporated into the shells of microscopic protists known as foraminifera increases as the salinity in which the organism grows increases. "These improved calibrations of shell sodium to surface salinity will be tested by comparing their results to a record of past salinity change during the last ice age using an ocean sediment core based on a different, less precise method.

"For several decades now, Paleoceanographers have had a robust method of reconstructing past sea surface temperature based on geochemical changes in foraminiferal shells, but we've never been able to accurately reconstruct past changes in sea surface salinity," said Schmidt.

This project will utilize measurements of sodium/calcium (Na/Ca) ratios in two species of planktonic foraminifera abundant in surface sediment samples from the Atlantic, Pacific, and Indian Oceans. The sediment samples come from regions of the ocean spanning large sea surface salinity gradients. "Ocean foraminifera that live in the ocean and build a shell out of carbonate, and they adjust those trace amounts according to the conditions they live in," said Schmidt. "Since the 1990's we've had a good way and we've never had a proxy to measure salinity."

For the first time, scientists will be able to generate both temperature and salinity proxy records on the same fossil shell sample, providing a more complete understanding of how the climate system operated in the past. These records are needed to understand how ocean and atmospheric circulation patterns changed in the past under different climate states and to help scientists predict how the climate system will evolve in the future.

"The goal is to determine how the amount of sodium incorporated into the shells of these tiny zooplankton is related in the salinity in which they grow their calcium carbonate shells," said Schmidt. "We will develop robust calibrations relating Na/Ca ratios to surface salinity in the modern ocean." Then, by using fossil foraminifera collected from deep sea sediment cores, these calibrations can be used as a proxy for reconstructing past changes in surface salinity over the last several ice ages. With this knowledge, scientists will better understand how both the ocean and atmospheric circulation patterns operated under different climate states, such as during the Younger Dryas and the Last Glacial Maximum.

The geochemical analyses of the foraminiferal shells will be conducted by Schmidt's new Ph.D. student Rose Ernst at ODU on instrumentation located in the College of Sciences COSMIC lab.