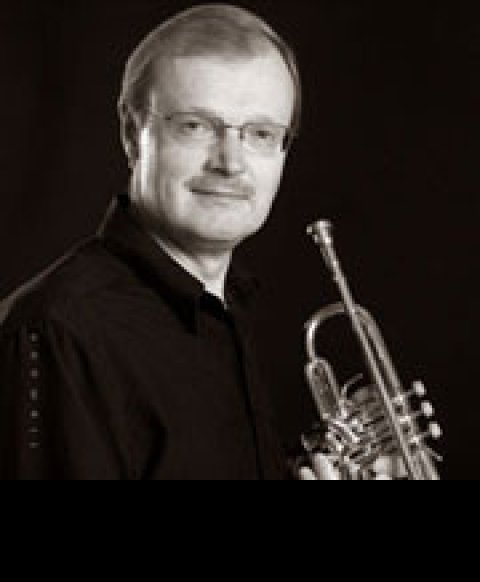 Dr. Stephen Carlson joined the Hampton Roadsmusical community in 1975.A native of Duluth, Minnesota, he serves as Associate Principal/Third Trumpet with the Virginia Symphony and Pops, and with the Virginia Opera.His first 27 seasons (as Principal Trumpet) are to be observed in numerous prominent passages on critically acclaimed CD recordings released by the VSO in recent years.This association has also enabled him to accompany many of the greatest talents in the classical and pops worlds.Audiences in Virginia, Colorado, Michigan, Ohio, and Minnesotahave heard him as featured soloist with symphony orchestras and concert bands.Carlson is also active as trumpet recitalist with piano, and he also appears on each year's American Guild of Organists recital series, in association with the Virginia Arts Festival.Carlson also performs with the Norfolk Chamber Consort and the Virginia Symphony Brass Quintet.From 1975 until 2004, Dr. Carlson served as Professor of Music at Norfolk State University, teaching applied trumpet and horn, brasswind class, music education, music appreciation, andgraduate courses, and also servingas university supervisor to the instrumental music student teachers during their experience in the public school classroom.Dr. Carlson'srecentlypublishedscholarlyedition and recording of cornet solos from the turn-of-the-century by H. A. VanderCookhas been distributed to over 120 middle and high schools in this region, through a grant from the Brambleton Center of Norfolk State University.Priorto joining the NSU faculty, Dr. Carlson taught full time at the University of Missouri at Kansas City (1973-1975); he also has served as adjunct faculty at the College of William and Mary, the University of Michigan, Virginia Wesleyan College, and Mid-America Nazarene College.His former students occupy positions at all levels ofteaching,as performers in military and community bands, symphony orchestras, and recently in the Canadian Brass.At the present, Carlson serves Old Dominion University as Professor of Music (Adjunct), teaching applied trumpet and brass class.He also is on the faculty of Young Musicians of Virginia, and he maintains a private teaching studio.Carlson has earned degrees from the University of Minnesota, Duluth (Bachelor of Science, Music Education, 1970), the University of Michigan (Master of Music, Trumpet Performance, 1971), and the Catholic University of America (Doctor of Musical Arts, Trumpet Performance , 1981).As a Teaching Fellow at Michigan, he toured Europe as first chair cornetist with the U/M Symphony Band under William D. Revelli.His trumpet professors include Clifford Lillya, Lloyd Geisler, and Adel Sanchez.He has had additional private coaching from Vincent Cichowicz, Armando Ghitalla, Frank Kaderabek, Stephen Chenette, and Irving Sarin.