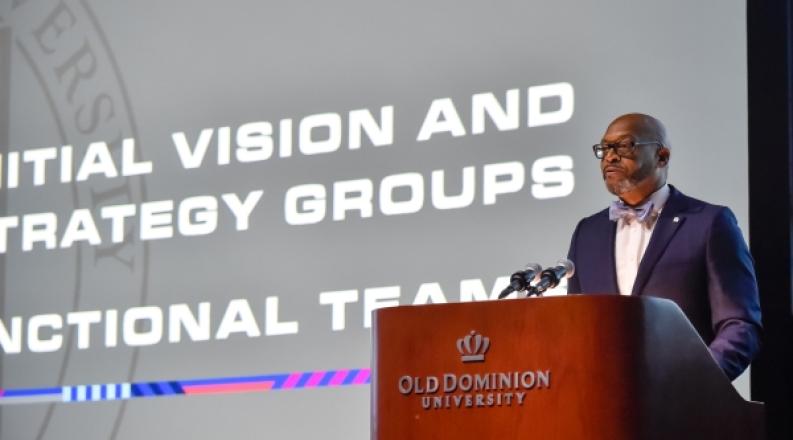 Old Dominion University President Brian O. Hemphill, Ph.D., announced plans for an Institute of Data Science and an expanded baseball facility during his first State of the University address, which he delivered Friday at Chartway Arena.

The University is in the final stages of submitting a proposal to the State Council of Higher Education for Virginia regarding the School of Data Science, he said.

"This is truly a win-win for ODU and our partners," President Hemphill said.

The baseball stadium project exists thanks to the generosity of several donors, including Priority Automotive President and CEO Dennis Ellmer, who gave $2.5 million.

"ODU is honored that the expanded facility will be known as the Ellmer Family Baseball Complex," President Hemphill said. (See related story.)

In a further announcement, the ODU leader said the University was in the first phase of a multiyear effort to increase stipend levels for graduate assistants. Master's students with teaching assistant duties will receive $15,000 - a boost of $5,000 - to support the institution's mission of teaching, as well as research.

Stipends for doctoral students will increase from $15,000 to $20,000, effective immediately, President Hemphill said.

Among other achievements he highlighted from the past year was ODU's designation in December 2021 as an R1 research university by the Carnegie Classification of Institutions of Higher Education. This placed ODU among the nation's top research institutions.

"This is a truly significant accomplishment and will forever change the future possibilities for our institution and our students," President Hemphill said.

But his vision is grander still.

"We are truly committed to moving up among our R1 counterparts with a bold and aggressive agenda across all research areas, with a special emphasis on maritime, coastal resiliency, offshore wind energy, data science, cybersecurity, autonomous systems and health care."

On the health care front, President Hemphill cited the University's expanded work with Eastern Virginia Medical School and a deepening collaboration with Sentara Healthcare and other partners. Since the summer of 2021, the entities have been meeting to explore the establishment of an academic health sciences center to address health disparities facing the region and its people, President Hemphill said.

"A strategic integration between EVMS and ODU would result in an academic health sciences center that offers the highest number of academic programs and the largest enrollment in health sciences in the Commonwealth of Virginia," he said.

The proposed integration would strengthen and increase the workforce pipeline in Hampton Roads, he said, creating an economic impact of $4.9 billion for Virginia.

Highlighting other initiatives in progress, President Hemphill updated the audience on construction of what he called "state-of-the-art facilities that create a learning environment that is second to none."

The Health Sciences Building, a capital project of more than $76 million, is taking shape at 41st Street and Monarch Way and is scheduled to be finished in summer 2023. The three-story building will house the School of Dental Hygiene, the School of Rehabilitation Sciences and the School of Medical Diagnostic and Translational Sciences.

During the most recent legislative session, the University secured $188 million in project funding for a new Biology Building. With more than 160,000 square feet across five floors, it is scheduled to be ready in 2026, replacing the Mills Godwin Life Sciences Building.

Regarding athletics, President Hemphill spoke about the "new era" Old Dominion entered in July of this year when it joined the Sun Belt Conference.

"For ODU, the conference movement was always about providing the very best experience for our student-athletes as well as our fans," he said. "We are honored to join the Sun Belt and look forward to a great deal of collaboration and competition in our inaugural season and beyond."