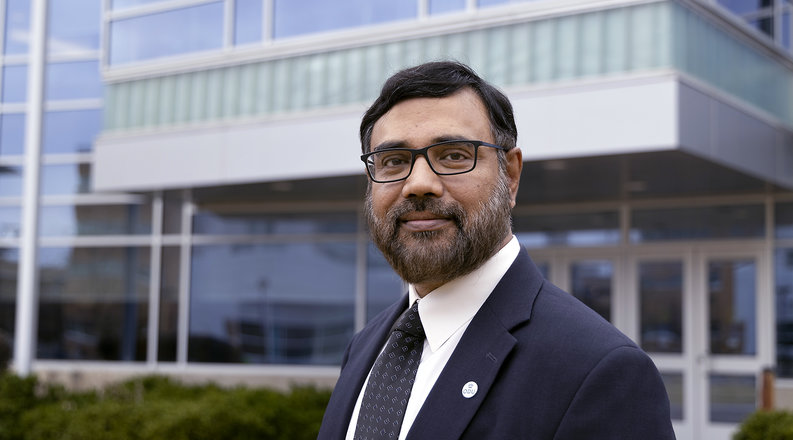 Khan Iftekharuddin, a professor in Old Dominion University’s Batten College of Engineering and Technology and a renowned scholar in computer vision and machine learning, has been named a 2023 Outstanding Faculty Award winner by the State Council of Higher Education for Virginia (SCHEV).

He will receive his award, along with a $7,500 gift from the Dominion Energy Charitable Foundation, at a March 7 ceremony in Richmond.

Out of 74 nominations received, 12 faculty members from around the state were named award recipients. Since the program was established in 1987, ODU faculty have earned 36 Outstanding Faculty Awards.

“It was a wonderful surprise when I received a phone call from SCHEV,” Iftekharuddin said. “This award embodies the hard work of my students, colleagues and my family who have supported my journey and my quest for the greater good through scholarship over so many years.”

“Dr. Iftekharuddin has made and continues to make exemplary contributions in teaching, research administrative leadership and service that positively impact our students and the people of Virginia," Fridley said. “He is one of those rare faculty members who is able to continuously excel in all aspects of our mission.”

“He lives excellence in research and scholarship,” she said. “He brings out the best in his students through his example.”

He has applied his expertise in image analysis to fight high-grade glioblastoma, the aggressive brain cancer that killed U.S. Sens. Edward M. Kennedy and John McCain. He pioneered ways to identify abnormal brain tissues and predict tumor growth with the aim of improving the diagnosis, surgical removal and treatment of this deadly cancer. In recognition of his work, the ODU Office of Research honored him with the 2020 Faculty Research, Scholarship and Creative Achievement Award.

Listed among the top 2% of researchers worldwide for career and single-year impact, Iftekharuddin is also the associate dean of research in the Batten College and the Batten-endowed chair in machine learning.

In addition, he directs ODU’s Vision Lab. The laboratory aims to develop novel theory, state-of-art algorithms and architectures for real-time applications in human and machine-centered interaction and recognition; biomedical imaging and signal analysis; and environmental science and geoscience.

The Outstanding Faculty Awards are the state’s highest honor for faculty at Virginia's public and private colleges and universities. These awards recognize superior accomplishments in teaching, research and public service.