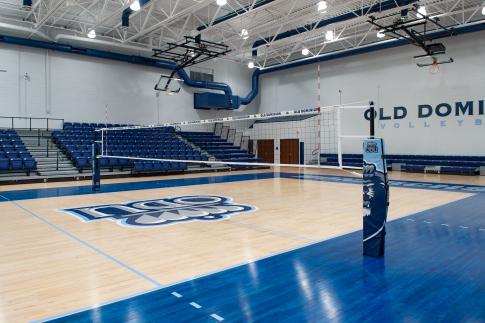 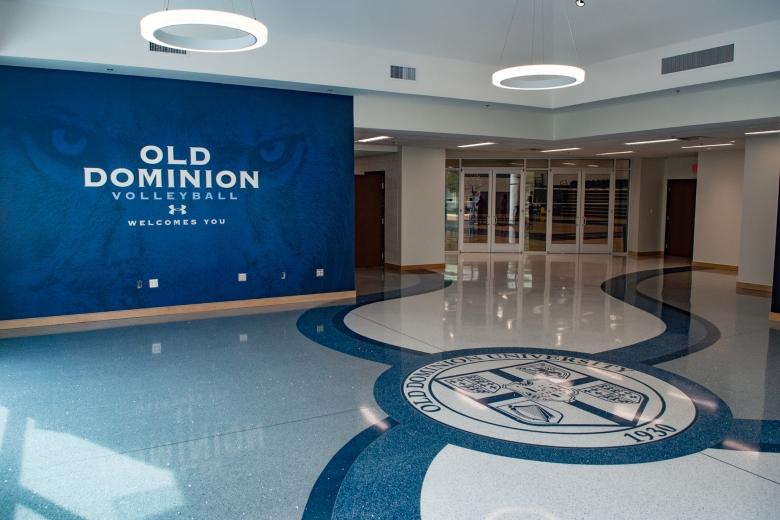 David Robichaud, ODU's director of design and construction, said the foyer is one of the main "wow factors" that will make the volleyball center a pleasing and comfortable place for spectators. Photo Chuck Thomas/ODU

When Old Dominion University announced it would begin playing women's volleyball this school year, officials promised that not only would the Monarchs compete, they would be given the resources to win.

Some schools have simply put up a net in their basketball arenas and called that their volleyball home courts.

However, in large part because of the leadership of President John R. Broderick and Athletic Director Wood Selig, ODU took a different route. President Broderick wanted the volleyball program to have one of the finest facilities in Conference USA.

The renovated facility was designed primarily for volleyball but also will benefit the University and its students as a multipurpose venue that can be used for other events, including summer basketball camps, volleyball camps and University gatherings.

The venue was turned over to the University this week by Virtexco, the Norfolk-based contractor ODU hired to refurbish the gym. And it is everything and more that ODU promised volleyball coach Fred Chao.

"Anyone who walks into this facility is going to know right away that ODU isn't just committed to playing volleyball, it is committed to playing at the highest level possible," Chao said. "This is a visible representation of the commitment that President Broderick and the University have made to volleyball. They want us to be competitive and they've been true to their word by providing us what we need to do that."

President Broderick came to practice Tuesday morning to speak with the team and tour the facility.

"This is going to be a really nice home for you," he said. "I had the opportunity a few times to go to some other women's volleyball facilities, and they don't compare to the facility we have, or what we have in the way of intimacy here."

The center will seat 822 fans, more than half in chair-back seats. The relatively low ceiling and concrete walls that hold in noise will provide a lively home court.

President Broderick took questions from the players and praised them for their academic performance - all but one player was on the dean's list last spring. That's impressive given more than half the team majors in STEM-H (science, technology, engineering, mathematics or health services).

"I'm gratified to see how well most of you are doing in the classroom because no matter how many points you score or how many victories you achieve, the most significant thing you're supposed to do here is walk across that stage at Chartway Arena, shake my hand and get your degree," he said.

The gymnasium underwent a dramatic transformation. Seating and a scoreboard were installed, the floors were refurbished and ODU signage was mounted into what is now the ODU Women's Volleyball Center. Even the old metal halide lights, which made a constant buzzing noise, are gone, replaced by quiet and bright LED lights.

And that was just the start.

Offices were knocked down to create the main entrance, including a large foyer with the University seal emblazoned on the floor. Large windows will give students, faculty and visitors passing by a view of the court.

David Robichaud, ODU's director of design and construction, said the foyer is one of the main "wow factors" that will make the volleyball center a pleasing and comfortable place for spectators.

The center is located a stone's throw from the Quad residential halls, and officials anticipate volleyball will draw a lot of spectator support from students in the future.

Fans won't see a lot of upgrades in other parts of the facility, reserved for coaches and players.

Offices were demolished or repurposed into support staff offices, a new visitor's locker room, a dressing room for refs and coaches' offices. Best of all for the players, ODU added a new locker room and an adjoining team room, where the Monarchs can watch film, hold team meetings or just hang out.

The team room has a giant TV and on one wall, an ODU logo and the word "MONARCH" backlit in blue, a refrigerator, sink and cabinet. Overhead lights can illuminate the entire room in blue.

The locker room is crafted wood lockers with a place to hang uniforms, overhead bins, a cabinet and drawer for shoes as well as polished metal nameplates that include each player's name and hometown.

The lockers face a giant graphic of a lion on the wall, and lights can also give the room a blue haze.

ODU also has a few other advantages over competitors. In addition to the court, lockers, team room and other amenities, academic advising, a large athletic training room and weight-training facilities are located in the facility.

"Our players have everything they need in this building," Chao said.

"Having played volleyball in college and having worked at numerous Division I universities, I can honestly say that our facility is among the best in the country," Crutchfield added.

Design & Capital Construction Project Manager Chris Pewterbaugh "did an extraordinary job ensuring the project architect DJG and Virtexco completed the project within budget despite all the challenges we had to overcome because of the COVID pandemic," Robichaud said.

Rick French, associate athletic director for operations, oversaw the project for the athletic department and helped incorporate requests from Chao for finishes, such as furniture and signage. Chao said ODU donors committed money for upgraded office furniture and other amenities.

Even before work on the new facility began, the family of Ron Ripley, former rector of the ODU Board of Visitors, endowed a scholarship in the name of First Lady Kate Broderick and the President.

The out-of-bounds area on the court is painted in blue, as you might expect, but when you look closer, it is a hue of many colors of blue, something Chao requested.

Columbia blue, the light blue that was ODU's primary team color years ago, is preferred by Chao and is featured in every room.

Chao was named coach in nearly 2019 and he recruited a team that worked out during the fall of 2019. The Monarchs were supposed to play this fall, but the pandemic forced ODU to postpone all fall sports until January.

In some ways, that was fortunate. The pandemic also delayed construction by three months. Now, it will be ready when ODU opens at home against George Mason, Chao's alma mater, on Jan. 22.

President Broderick said he will be at that first game and offered advice to the players as to how to approach it.

"You are our first volleyball team," he said. "I hope at some point, that first time you really get playing here, that for just a second or two before it starts, you reflect on that.

"You will set the tradition. Hopefully, the ladies who follow you here will say there was a high standard set not only in terms of how you competed and how you did academically, but equally important, how you were human beings." 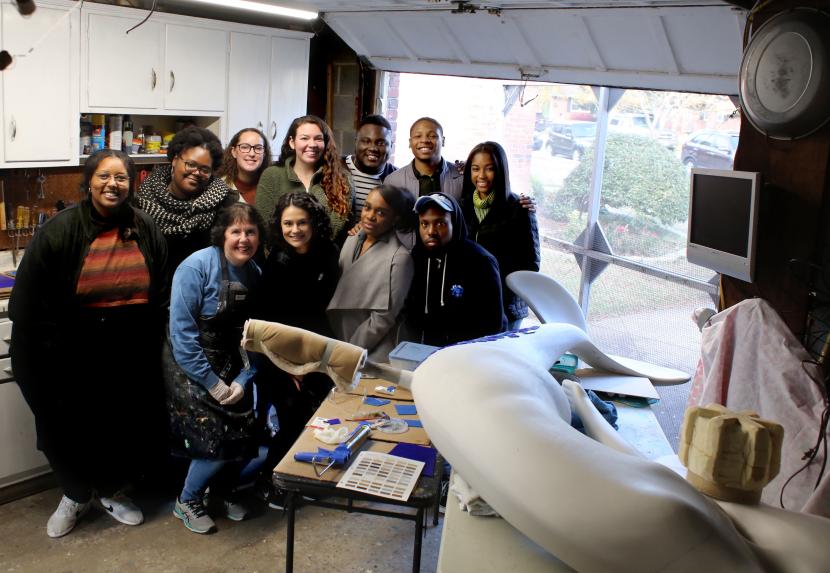 ODU to Unveil Its Mermaid on Oct. 28

A symbol of Norfolk that was championed by alum Peter G. Decker Jr., it will be located at Brock Commons. (More) 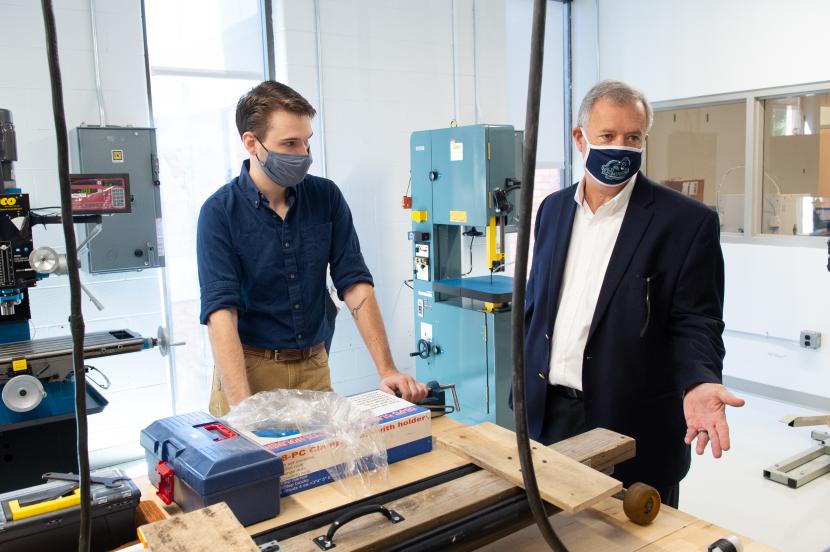 GENEDGE pledges five-year investment in the 7,000-square-foot, state-of-the-art facility, which is slated to open in the spring of 2021. (More) 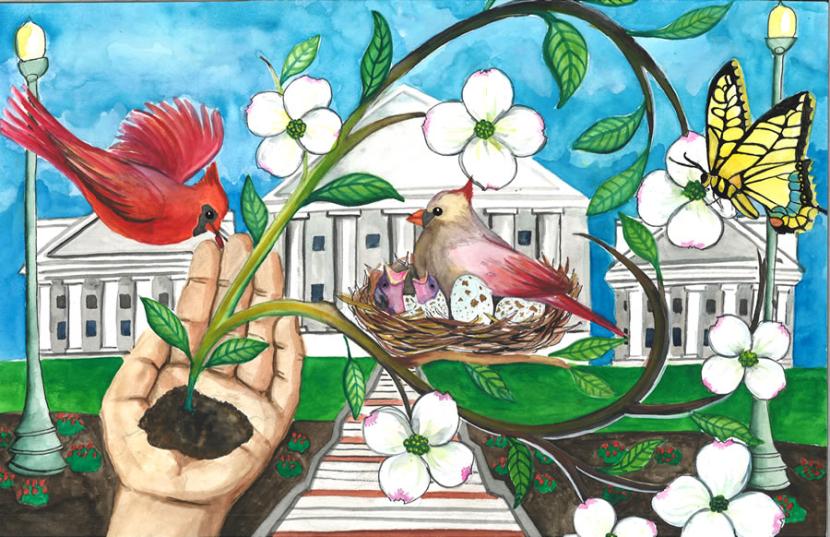 CVC: Monarchs Can Make A Difference

Annual Commonwealth of Virginia Campaign is underway and ODU's Rise to the Challenge fund is included in the list of eligible charities. (More)