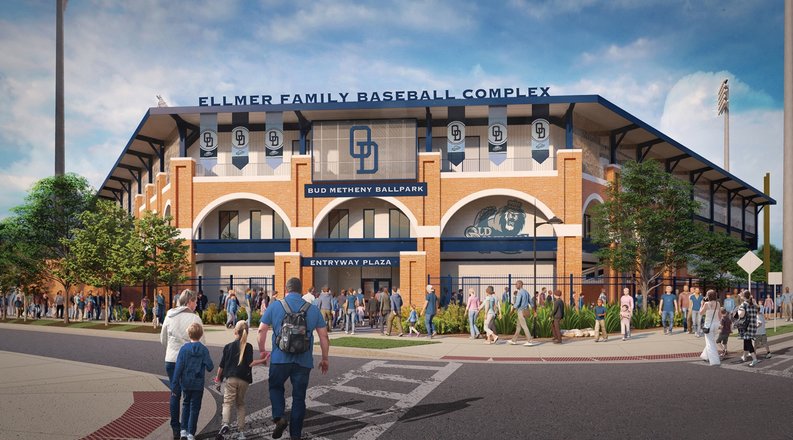 Populous will work with Moseley, a Virginia Beach architectural firm, to design an anticipated $20 million expansion of the stadium. The firms have collaborated on several local projects, including the $72 million renovation and expansion of ODU’s S.B. Ballard Stadium, creating what’s regarded as one of the finest football facilities among Group of Five schools.

Brandon Armstrong, project manager for ODU’s design and capital construction office, will lead the project for the University and work closely with Populous, Moseley and ODU athletics.

Populous was selected after a competitive bid and interview process.

The impetus to renovate Bud Metheny Ballpark, which opened in 1983, came after top-seeded ODU was rejected by the NCAA as a host site for a regional tournament in 2021 because the facility did not meet the governing body’s minimum standards.

Shortly thereafter, the University authorized a feasibility study on replacing or renovating the stadium. Populous and Moseley jointly worked on the study, which recommended a $20 million overhaul.

ODU began a fundraising campaign 11 months ago to help pay for the project.

ODU has nearly $18 million in hand to fund the renovation, including a $2.5 million donation from local businessman Dennis Ellmer and his wife, Jan. The new facility will be known as the Ellmer Family Baseball Complex.

Much of the fundraising, including the donation from the Ellmer family, was facilitated by ODU President Brian O. Hemphill, Ph.D.

John Vellines, an ODU athletic development officer who has headed the stadium fundraising effort for the Old Dominion Athletic Foundation, said “it’s absolutely critical that we get to the $20 million mark.”

“Once we get to $20 million, we’re not stopping,” he added. “We need to continue to upgrade the complex in the future in order to compete with the Power Five schools that we recruit against. And we still don’t know the final price tag.”

ODU head baseball coach Chris Finwood, who has been active in the fundraising effort, echoed Vellines.

“We can’t stop when we get to $20 million,” Finwood said. “We’ve got to keep pushing the envelope on that.”

As envisioned in the study, the stadium will have new locker rooms and offices, improved sight lines and chairback seating behind home plate. There will be a larger press box and expanded restrooms and concessions.

Moreover, a premium club, similar to the Priority Automotive Club, will be located behind home plate. It has not yet been named. There are dozens of other naming opportunities available, including the 40 lockers in the locker room.

The club would have large picture windows looking onto the field, luxury seating, big-screen televisions, upscale concessions and an entrance to a covered outdoor terrace with stand-up tables, chairback seats and patio heaters for games in February and March.

The stadium’s back façade, the most visible portion of the facility, will be encased in “ODU brick,” an orange brick used for most University buildings, as well as blue steel.

“We want this facility to be one that everyone in the community will be proud of,” said Wood Selig, ODU’s director of athletics. “We want to give our coaches a facility that will help them recruit and our student-athletes a world-class training and competition venue.

“We already have great fans. Providing a more comfortable place to watch games will help us grow our fan base.”

Populous has designed some of the world’s most dynamic stadiums and arenas, including Mercedes-Benz Arena in Berlin, Soccer City in Johannesburg, South Africa, and the $1.2 billion Tottenham Hotspur Stadium in London.

In the last 35 years, the group has designed more than 3,000 venues worth $40 billion, including Norfolk’s Harbor Park baseball stadium when Populous was known as HOK Sport.

Moseley, meanwhile, has helped design more than 100 collegiate facilities in Virginia. Jeff Hyder and Patrick Ramirez from Moseley will work with Populous and ODU on the project.

Armstrong is an ODU graduate who worked on the University’s new chemistry building while employed by WM Jordan. He has also been assigned to oversee the largest project in ODU’s history – a planned $146 million Biology Building, now in the design phase.

“I enjoy working with them because I know this is a lifelong passion for them,” he said. “When you work with people that are passionate about a project, it makes it all that much more rewarding to do.”

Finwood is part of the design team. He said he’s glad Populous and Moseley were selected.

“When we were working with them on the feasibility study, they were outstanding in every possible way,” he said. “They were accessible, they know what they’re doing and they never made us feel like small potatoes.”

For an overall presentation on the stadium project, and to learn about available naming rights opportunities, CLICK HERE.