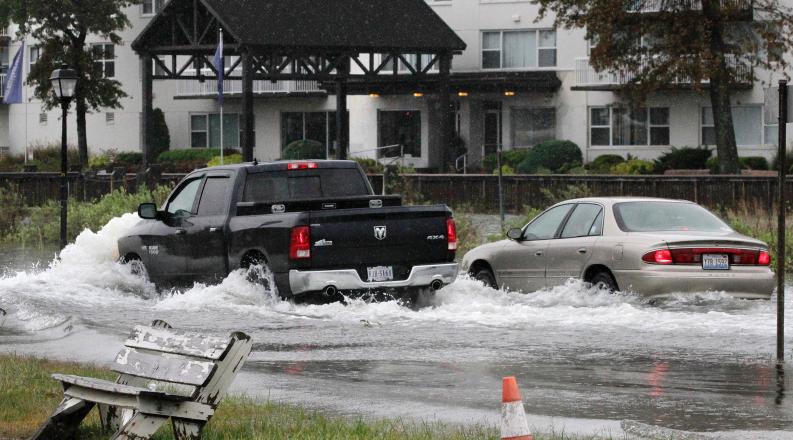 Climate change and sea level rise are forcing leaders in coastal areas to make important decisions about the health and safety of their communities.

With the help of researchers from Old Dominion University, decision makers in Hampton Roads will better understand their mitigation options.

The NASA grant totals $1.2 million over two years. Researchers will combine technologies such as satellite imagery, flood sensors and drones to collect data for a geographic information system (GIS) and hydrodynamic modeling of flooding. The GIS will serve as a “digital twin,” with the ability to simulate the effects of sea level rise, flooding and extreme weather events on vulnerable neighborhoods and future populations.

“It will sort of be like a time machine,” said Tom Allen, a geography professor at ODU and principal investigator (PI) for the NASA grant. “We could go to 2040 and say, ‘Here is sea level rise, here is a storm surge, here is the future population,’ and simulate how communities may respond to those conditions.”

The co-PIs for the NASA grant include:

“It will sort of be like a time machine,” said Tom Allen, a geography professor at ODU and principal investigator (PI) for the NASA grant. “We could go to 2040 and say, ‘Here is sea level rise, here is a storm surge, here is the future population,’ and simulate how communities may respond to those conditions.”

They aim to eventually present the prototype to stakeholders in the region, including public health practitioners, urban planners and emergency managers. The project will specifically look at the impact on public health. Allen said that some of the communities most affected by sea level rise and flooding are also the most socially and economically vulnerable, an issue that could have larger effects in the future.

“So, a simulated scenario may be to assess an area that is flood prone and evaluate what their access to health care or emergency services will be like,” he said.

At $1.9 million, the NOAA grant is funded for four years and focuses on the impacts of sea level rise and flooding on transportation systems and how natural and nature-based features can alleviate flood impact. The team, composed of researchers at ODU and the University of Colorado Boulder, will bring together expertise in coastal engineering, transportation engineering, materials engineering, GIS and mapping and economic analysis.

The co-PIs for the NOAA grant include:

Researchers will use hydrodynamic modeling – the study of fluids in motion – to quantify how natural features, like marshes, oyster reefs and beach nourishment, and traditional protection measures, like sea walls and tide gates, can reduce flooding under sea level rise.

They will analyze how these different tactics – or a combination of tactics – would affect traffic and damage to pavement and roadways. Finally, they will study the economic impact of mitigation efforts on the regional economy and engage partners, like the city of Norfolk.

“Regional stakeholders have some mitigation plans already in place, which makes their engagement even more important,” said Navid Tahvildari, PI for the NOAA grant. “It would be helpful to know what those plans are so we can set up our scenarios to match those and not just work with hypotheticals.”

Since Tahvildari is co-PI for the NASA grant and Allen is co-PI for the NOAA grant, their teams will share data and tools to support their tandem goals. And by engaging directly with the people working to address these issues in the region, they hope their research will lead to the best solutions.

“We want those groups to work with us to define the problem,” Allen said.