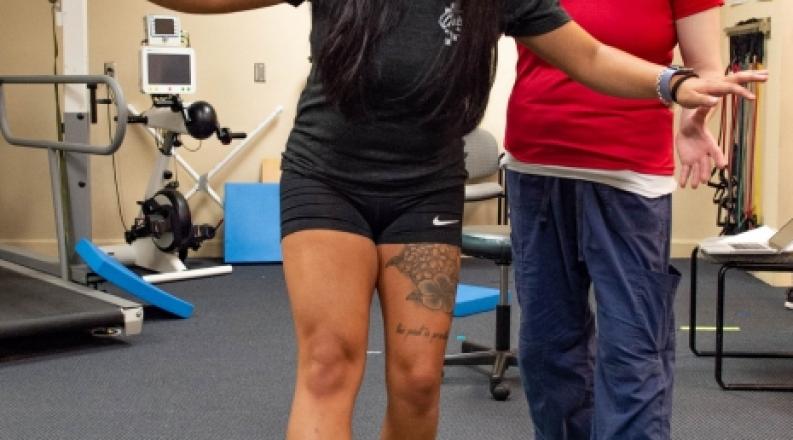 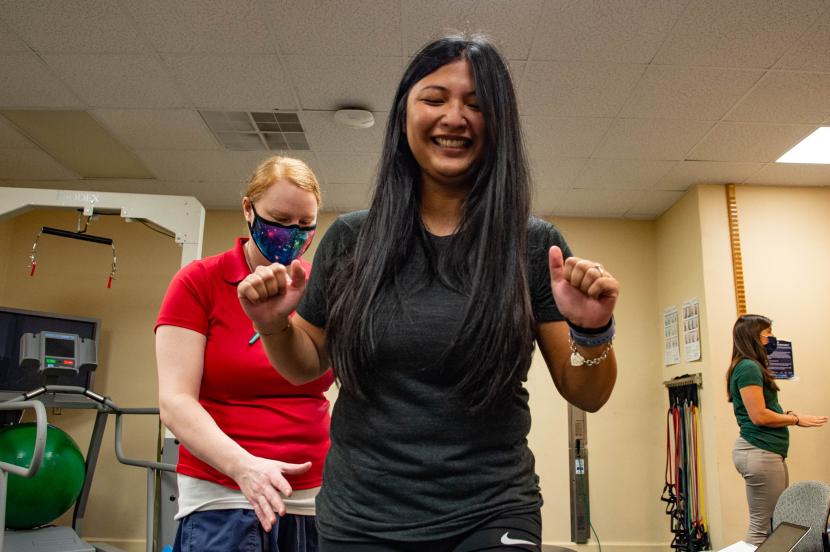 "I get more relief from physical therapy than I do from anything else," Gallagher said. That's in part because her PT regimen includes soft and deep tissue massage. Photo Chuck Thomas/ODU

Jalina Gallagher has likely lived with pain since the day she was born, and the 23-year-old Old Dominion University student has also been receiving physical therapy longer than she can remember.

After her grandfather noticed she wasn't using her left side when she crawled, doctors discovered she had suffered a stroke during or shortly after birth.

She was partially paralyzed, and doctors later diagnosed her with left hemiparesis cerebral palsy and precordial catch syndrome that, while not life threatening, can cause severe chest pain and shortness of breath.

She has had blood clots and pancreatitis, and her left leg is smaller and shorter than her right. All of that has made life a painful challenge.

"There are times," she said, "when the pain is just excruciating."

When she was a child, she found relief in only one place - a physical therapy clinic. The doctors would diagnose and the nurses would draw blood, but it was the physical therapists who helped her live a somewhat normal life.

That's why, in spite of her physical limitations, Gallagher is enrolled in ODU's Doctor of Physical Therapy program. She begins her second year this month and in May 2023 will become Dr. Gallagher and a full-fledged physical therapist.

Jalina's first memories of PT were from when she was 4, a time when she was often hospitalized and had a ton of appointments with doctors.

"I felt safe there."

Not surprisingly, her goal to become a pediatric physical therapist, so that she could help kids just like others helped her, began taking root at that time.

Gallagher began receiving treatment at Monarch PT when she was a sophomore at Virginia Beach's Bayside High School, which she attended because of the school's health science academy. At the time, she wore a foot brace and experienced chronic back pain.

She was examined by Dr. Beverly Roberts-Atwater at Eastern Virginia Medical School. She advised her to get rid of the foot brace and seek physical therapy at the recently opened clinic at ODU.

"My mom and I call Dr. Atwater the Unicorn Doctor," Gallagher said. "After so many years of pain, I found some relief. My pain now is 98% better. What I have now is what I know I have to live with."

Yet she is still in so much pain at times she must take a prescription painkiller. She stresses painkillers are a last resort. The health profession rates pain on a scale of one to 10. Only when she gets to nine or 10, "when the pain is to the point where it would usually send me to the hospital," does she take a painkiller.

"I get more relief from physical therapy than I do from anything else," Gallagher said. That's in part because her PT regimen includes soft and deep tissue massage.

"I hope Jalina's story will help others understand that physical therapy is an effective option for relieving pain without the adverse effects or risks associated with prescription pain killers," Koperna said.

Gallagher is surrounded by a loving family that has provided immense support, especially her parents, Gwen Gallagher and Jeff Sabado and brother Tyler Sabado. Gallagher took her mother's last name in recognition of her steadfast support of her daughter.

"She was the one there to fight for me, especially when I didn't know how to express the pain I was having," she said. "She could always read that and tell the doctors what I was feeling.

"She was fighting for me when I could not fight for myself. She's honestly my everything."

So is Seth Nesbitt, her boyfriend of four years, who has also taken up her cause.

"He's so good to me," she said. "If we're out somewhere, at the beach or wherever, and he sees me limping, he says it's time for us to go home."

She wears her love of those who've helped her on her left leg. She has an ankle tattoo for her grandfather, Maury Gallagher, who died in October. It's a honeysuckle vine with one yellow flower to represent him. It also has his signature with a smiley face he drew.

She has a large tattoo on her thigh for her other grandfather, Nore Sabado, whom she called "Lolo."

Her plan is to have a complete leg sleeve of tattoos.

She also wears a bangle necklace given to her by her mother that says, "You can do it girl! Love, Grandpa."

Grandpa Gallagher "would always say to me, 'You can do it, girl' whenever I was facing an obstacle," she said.

"When I look down and I see it, it's a constant reminder that I know he believed in me, so why shouldn't I believe in myself?"

Wheeler said Gallagher is going to be a great physical therapist. 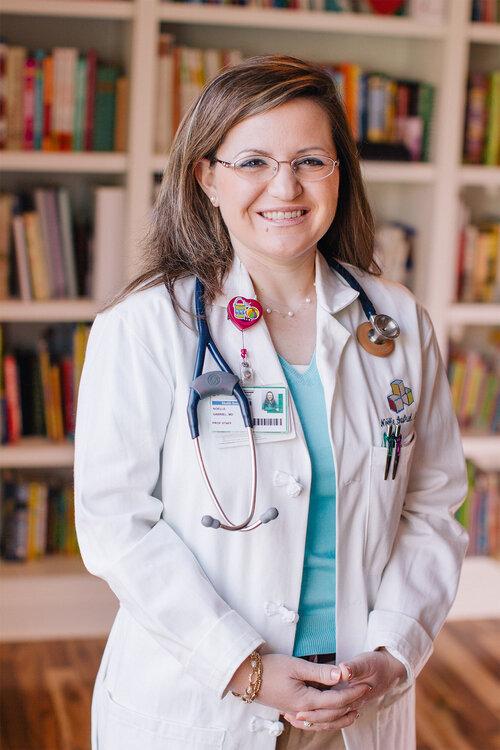 Pediatric Physician Noelle Gabriel, an ODU Alum, Gives Back to Her Norfolk Hometown in Many Ways

She says her education and research opportunities at ODU prepared her for the challenges posed by the pandemic. (More) 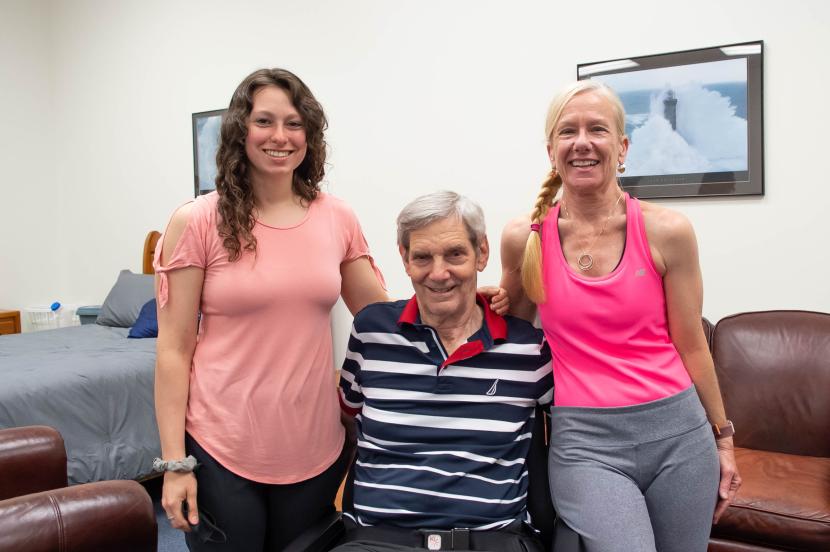 Cynthia Faschini says what therapists have done during her husband Andy Wallach’s recovery “has been miraculous.” (More) 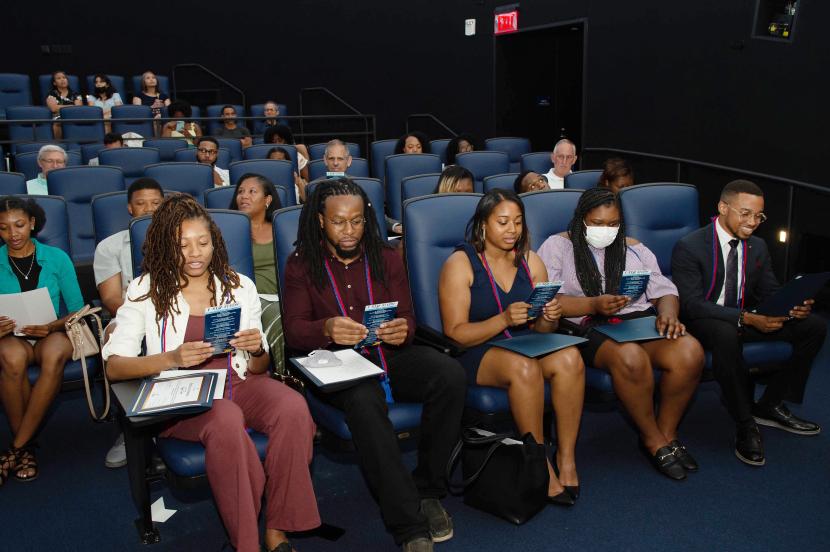 The five scholars are the first to be inducted into the Graduate Research Training Initiative for Student Enhancement Program. (More)