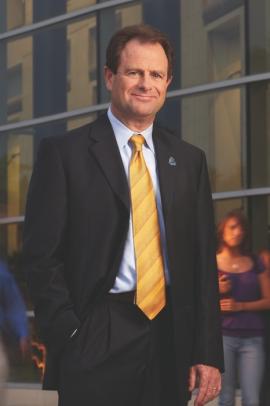 Virginia Business has included Old Dominion University President John R. Broderick in its first VIRGINIA 500 "power list" of influential executives in the Commonwealth. The magazine compiled the list based on contacts in regional business circles and hundreds of interviews.

President Broderick, who is the University's longest-serving president and plans to retire in the summer of 2021, is recognized for his more than 28 years of service and outstanding work in advancing the quality of student life on ODU's campus. Since his appointment as the eighth president of ODU in 2008, President Broderick has established initiatives to set Old Dominion apart from other universities. During his tenure, Old Dominion has graduated more than 50,000 students; awarded the second-largest percentage of degrees in STEM-H (science, technology, engineering, math and health care) among Virginia's doctoral institutions; received more than $1 billion in new and committed resources; and been recognized in the top 15 nationally for retaining and graduating African American students.

President Broderick is also a national leader on higher education affordability and social mobility, a key influencer in spurring the region's innovation and entrepreneurship ecosystem, and a prominent voice in combating sea-level rise and promoting recurrent flooding resilience.

A strong advocate for diversity and inclusion, President Broderick launched the President's Task Force on Inclusive Excellence, and the Diversity Champion Award was renamed in his honor. In addition, the Broderick Dining Commons was named for the president and First Lady Kate Broderick at the request of student leaders to recognize their commitment to inclusion initiatives and student success.

The VIRGINIA 500 will be mailed statewide in the September issue of Virginia Business. Read more: https://www.virginiabusiness.com/article/virginia-500-2020/

President Broderick to Retire in 2021

“Being a part of Old Dominion for some 26-plus years as a vice president and president has been a blessing in so many ways,” he says. (More)