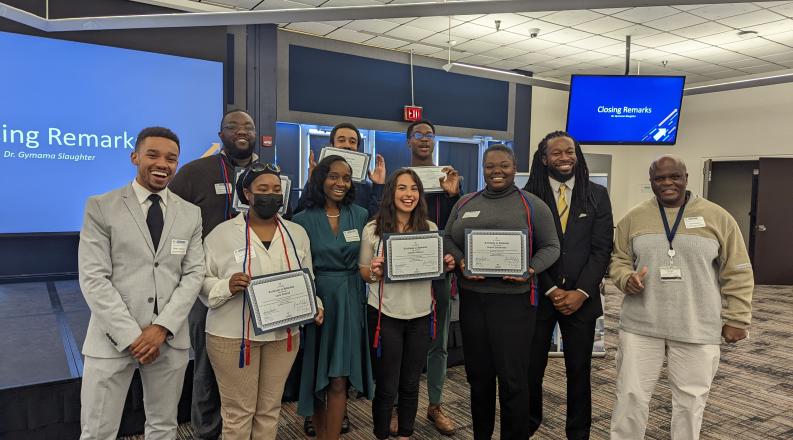 The G-RISE program is designed to increase the diversity of biomedical researchers by attracting underrepresented students from minority, military, socioeconomically disadvantaged and disability groups to the field.

The program is funded by a $1.6 million renewable grant from the National Institutes of Health's National Institute of General Medical Sciences (NIGMS) that was awarded to principal investigator Gymama Slaughter, executive director of the Center for Bioelectronics, and co-PI Alvin Holder, associate professor of chemistry and director of ODU's Maximizing Access to Research Careers Program (MARC).

The award also comes with a $1.1 million institutional match from ODU.

Members of this year’s cohort are:

Ujah earned a bachelor’s degree in physics from North Carolina Central University and enhanced his skills in the Research Experiences for Undergraduates (REU) program, where he learned about particle physics.

“I have always had a passion for learning about the complexities of the world around me,” said Ujah, who describes himself as an aspiring inventor on his LinkedIn page. “Obtaining my Ph.D. in biomedical engineering will give me the necessary knowledge and skills to create and innovate technology to change the world.”

Rashad started out as a computer science major, aiming to become “an ethical hacker.” But in her freshman year at Fayetteville State University in 2019, she joined the Ronald E. McNair Scholars Program.

“Through this program I discovered my passion for biology and changed my major at the beginning of my sophomore year,” said Rashad, who adds that her interests include pathology and genetic conditions. “I began working under a new mentor researching fungal pathogens and soybeans. Throughout the rest of my undergraduate journey, I gained new skills and experience through research and relevant courses to better myself for graduate school and a successful career.”

Sanderson said math is her favorite subject, but a required computer programming course piqued her interest in data science. She participated in the REU program at Illinois State University, conducting research in areas of discrete mathematics, and worked for the Math and Science Resource Center at ODU, tutoring other students in higher-level mathematics courses.

She completed her BS at ODU and will now pursue a Ph.D., “where I can expand on my many interests to include nonlinear partial differential equations and computational fluid dynamics.”

Nathan Holland, mechanical engineering, with a focus on biomechanics

Holland, a married father of four, earned a master’s in engineering/acoustics from Penn State University before moving back to Hampton, where he grew up. He said teaching at Hampton University reignited his desire to get his doctorate in engineering, leading him to enroll at ODU.

“Here I have been able to bridge my expertise and experiences into biomechanical research,” he said. “I have enjoyed analyzing and processing muscular excitations represented via electromyography signals and analyzing ultrasound images, all to bridge these concepts with understanding of the physics and engineering behind the human body and its function.”

Anasco majored in chemistry as an undergrad at Mount Vernon (Ohio) Nazarene University, “allowing my nerdy interests to thrive.” While there, she earned a research internship at Nationwide Children's Hospital, as well as a summer research project, Guardians of the Cell. Her primary interests as she pursues her doctorate at ODU are drug delivery and design.

“I never imagined that my dreams would come to fruition of being an active influence within the scientific community,” she said. “From a young age, passion for scientific innovation and helping others developed within my heart, only growing stronger with time.”

Easterling, who has “a passion for STEM and an eagerness to explore new scientific fields,” earned his BS in biochemistry and molecular biology from Mercer University in Macon, Georgia.

As he enters ODU’s doctoral program, his primary interest is in the synthesis and functionalization of metallic nanoparticles. On his LinkedIn page, he said he hopes to transition into a research-and-development industry position.

Holder presented each scholar with a cord, a certificate and a small gift symbolizing courage.

“We, your extended G-RISE family, embark on this journey with you,” Slaughter said.

Nearly 50 people attended the retreat, where students presented biomedical research on topics ranging from smart health to diagnostic tools for a wide range of diseases, to industrial biotechnology and microbiology. Michael Hunt, lead facilitator at A&M Consulting and director of the University of Maryland, Baltimore County, McNair Scholars Program, conducted a session on holistic mentorship training.