ODU Baseball Coach Hits the Books on a Daily Basis 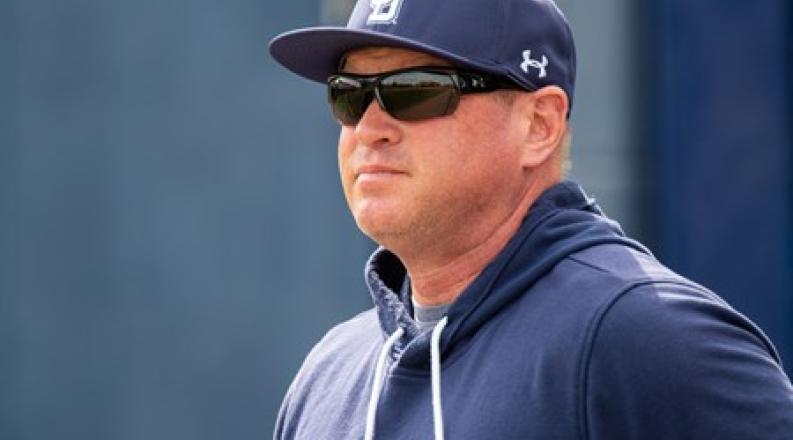 "Do not act as if you were going to live ten thousand years. Death hangs over you. While you live, while it is in your power, be good." - Marcus Aurelius

Chris Finwood keeps a dog-eared copy of "Meditations" on his desk. Considered a classic of Western Civilization, the book is a series of personal reflections written by Roman Emperor Marcus Aurelius before he died in 180 AD.

Finwood has dozens of sticky notes attached to pages so that he can quickly find quotes that inspire him. He is a voracious reader, often consuming several books a week.

He begins his day by reading from a great work of philosophy, from the famous Greek and German orators, Ralph Waldo Emerson or Ryan Holiday. At night, he dives into fiction, from Clive Cussler to Ernest Hemingway.

He's an adherent of stoic philosophy, begun more than 2,500 years ago in Greece, which asserts that you should not worry about what you can't control, so control only what you can, especially how you treat your fellow human beings.

Finwood majored in English at Virginia Military Institute, where he learned that the most precious commodity on Earth is time. That's why he reads rather than watch TV.

And did I mention that this bookworm, student of Western Civilization and buttoned-down former Keydet, is also one heckuva of a baseball coach?

This is Finwood's 10th season at Old Dominion University, and the Monarchs are in the midst of their best run in more than two decades. ODU is 38-14 and ranked among the nation's top 25 in the major polls and the top 20 in the NCAA Ratings Percentage Index.

Finwood, who collected his 500th victory this season, is 85-39 since 2019, including a 12-4 record in the pandemic-shortened 2020 season, when the Monarchs appeared headed for the NCAA tournament.

They open play Wednesday in the Conference USA tournament against Florida Atlantic in Ruston, Louisiana. Regardless of what happens there, the Monarchs will almost surely be among the 64 teams invited to the NCAA tournament on May 31.

"Finny," as he likes to be called, holds his players to a high standard on and off the field. Over the last decade, he has built a culture of personal accountability. If a player makes a mistake, Finwood likely won't have to say anything.

"Our players do that," he said. "They hold each other accountable."

The baseball team consistently has the best grade-point average of any of the University's men's teams, and his players are model student-athletes off the field.

"You're not going to get late-night phone calls with a problem about a baseball player," Athletic Director Wood Selig said. "His kids are going to graduate and a lot of them get drafted. I admire so much how he runs his program."

Being an ODU baseball player also means you will be read to every day. "Every day he will read us a quote, something to make us think and inspire us to do better," senior outfielder Kyle Battle said. "And I do mean every day."

Vinnie Pasquantino, a former ODU star now in the Kansas City Royals minor league system, said not only was there a quote every day, Finwood reads a book to the team every fall during offseason workouts.

Pasquantino said Finwood reads to his players "because he cares."

"It's not like he looks up these quotes on Google. He's studied them. He tells us what they mean, how we can use them to become better people."

"Today I escaped from the crush of circumstances, or better put, I threw them out, for the crush wasn't from outside me but in my own assumptions." - Marcus Aurelius

Finwood grew up all over the world in a blue-collar, Air Force family. His father, Kenneth, was a single dad and an enlisted man who retired as a master sergeant.

They lived in Germany, Hawaii, New York, Nebraska "and probably a few other places I've forgotten," Finwood said, before his dad was permanently stationed at Langley Air Force Base in 1976.

Finwood acknowledges he was "a bit of a hellion" while growing up.

He was also a baseball star who had his choice of scholarship offers. VMI was far from his first choice until his dad offered some sage advice.

"He told me, 'I know there's a lot of discipline at VMI and no matter what you're going to do in this world, you're going to need that. You need a lot of that right now,' " Finwood recalled.

Finwood enrolled at VMI where freshmen, known as "Rats," go through something called the "Rat Line."

Cadets walk at attention along prescribed routes inside the barracks and at any moment can be stopped by an upperclassman and asked to repeat what is on the lunch menu or sing a school song. Fail to recite the words precisely or have a scuff on your shoe or a smudge on your shirt and you do pushups while being loudly chastised by upperclassmen.

It's humiliating and demanding but designed to make you stronger and more self-confident. With every hour of every day planned, "you learn time management from day one," he said.

"That stays with you the rest of your life. We had a saying there, 'If you're late, you're forgotten.'"

He was a four-year starter for the Keydets who hit .399 as a senior. He graduated in 1988 and had some tryouts with major league teams, but his dad persuaded him to hang up his glove.

"My dad told me that if I'm determined to do this, 'I know you'll make one of those minor league teams,'" Finwood said. "'But with all due respect, you're not good enough to play in the big leagues. One day you're going to be 28 years old and wondering what to do with the rest of your life.'"

So, Finwood began working in VMI's admissions office and as an assistant baseball coach. After three years, at age 24, he was named head coach. Although he inherited a team that won just two games, he won 21 games in his second season and 20 the following year.

From VMI he went to Virginia Commonwealth University for six years, then to Auburn for five years. Selig, then the athletic director at Western Kentucky, hired Finwood to coach the Hilltoppers in 2005.

After enduring two rebuilding seasons, the Hilltoppers won two Sun Belt Conference titles in a row. A year after moving to ODU, Selig asked Finwood to come to Norfolk.

Finwood lost his dad long before returning to Hampton Roads. Kenneth Finwood had a heart attack while he was jogging. He was 49. Chris was just 25.

"There's a lot of regret there because he never got to meet either of my kids," he said, referring to son Grey and daughter Riley.

"My dad was really a wise man. Every time I listened to him, I made the right decision. I think about him every day. He's always with me."

This has been a particularly difficult season for Finwood and his family. His wife, Annette, died from pancreatic cancer on April 1.

Ever since, most of ODU's opponents wore purple ribbons or socks in her honor - purple is the color for pancreatic cancer, just as pink is for breast cancer.

ODU waited until May 14, prior to the first game of ODU's last home series against Western Kentucky, to honor her.

"Old Dominion and Western Kentucky were the two programs that Annette really loved," Finwood said. "I just felt like that was the right time."

There was a moment of silence before the first game and as the videoboard showed a wrought-iron blue bench erected in Annette's honor.

The bench is located at the front of the "Rally Alley" portion of the Bud Metheny Complex along the first base line, where Annette often stood and cheered for the team and, on occasion, railed against umpires.

The bench was proposed to Selig by Rick French and Kristin Eden, a married couple who work for ODU athletics and were with Finwood and Selig at Western Kentucky.

French, associate athletic director for operations, and his staff installed the bench within days of the proposal.

A plaque on the bench reads: "In loving memory of Annette Finwood. Her beautiful smile, laugh and whistle will always be a part of ODU baseball and her energy is always felt in her favorite place to watch games, Rally Alley!"

A picture of Annette in Rally Alley "cheering the boys on," as Finwood said, was placed atop the bench for the weekend. She was standing on top of a picnic table. A bronzed copy of the photo will eventually be placed on the bench.

"She loved baseball and she loved standing in Rally Alley," Finwood said. "That's the way she should be remembered." 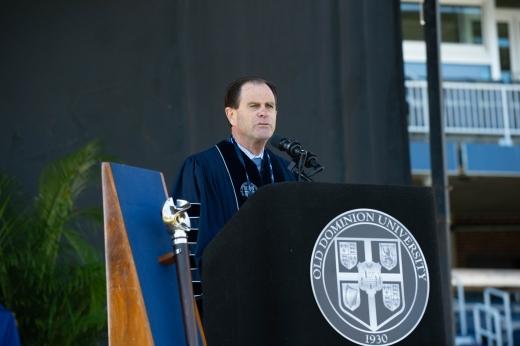 Nearly 4,000 students are participating in the events at Kornblau Field at S.B. Ballard Stadium. (More)

The latest donation by the organization will go to an endowment fund devoted to patient treatment and training of health-care professionals. (More)