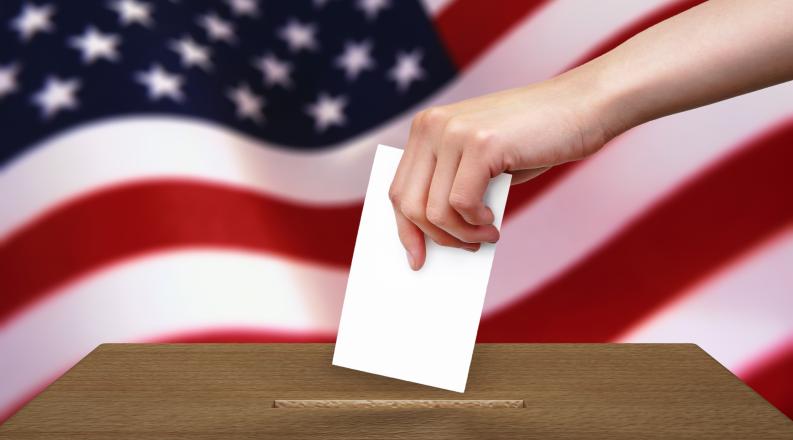 The Social Science Research Center (SSRC) at Old Dominion University recently completed data collection for the 13th annual Life in Hampton Roads (LIHR) survey. The purpose of this survey is to gain insight into residents’ perceptions of the quality of life in Hampton Roads as well as other topics of local interest such as perceptions of police, politics, the economy, education, health and COVID-19, transportation and other issues. A total of 639 telephone surveys were completed between May 31 and Aug. 19, 2022. Surveys this year were all completed over the telephone, as was the case prior to 2020. In 2020, due to COVID-19, surveys were completed via online web panels. In 2021, a mixture of online web panels and telephone surveys were utilized. This year, a mixture of listed and random-digit dial (RDD) cellphone and landline telephone numbers were used. From 2012 to 2019, RDD landline and cell phone samples were used. This change limits to some degree, the ability to compare this year’s results with those from previous years or to confidently generalize the results to the Hampton Roads population as a whole. However, as with previous years, this year’s survey data was weighted to match a city’s population distribution on several variables including race, Hispanic ethnicity, age and gender along with access to broadband internet service. For more detailed information on the methodological changes and potential impacts, please see the Methodology section in the full report or contact the SSRC directly. 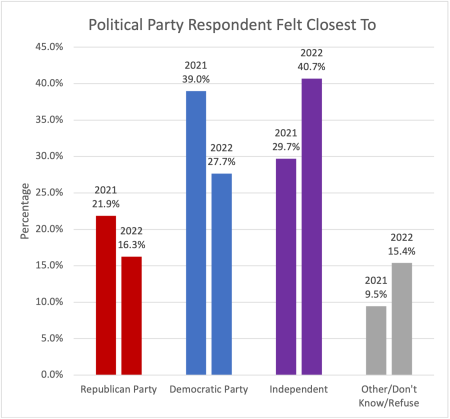 Political party affiliation among respondents to the survey continued to lean substantially toward the Democratic Party, in line with past surveys in Hampton Roads. Nearly three in 10 (27.7%) respondents said they felt closest to the Democratic party when asked the question “Do you generally feel closer to the Democratic Party, the Republican Party, or do you consider yourself to be an independent or something else.” Another 16.3% identified with the Republican Party. But this represents a substantial decline for both parties from last year, with the portion of respondents who indicated that they were political independents or affiliated with some other party surging to the highest levels we have seen in some time. Last year we found “a trend toward more individuals indicating a major party they felt closest to, especially on the Democratic side,” but this trend seems to have sharply reversed in 2022 with a majority of individuals indicating that they are political independents or affiliated with some other party.

This year we also brought back a political ideology question that hadn’t been asked for several years.  Individuals were asked to describe their political views on a seven-point scale ranging from extremely liberal to extremely conservative. This item suggests that the region is quite balanced ideologically, with nearly equal numbers of liberals, moderates and conservatives. 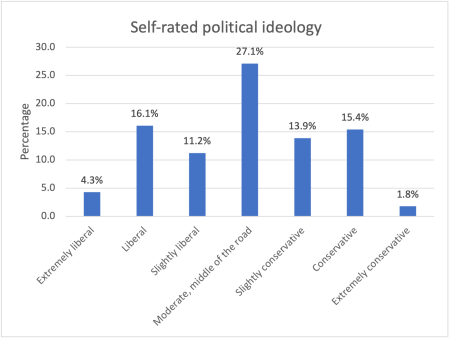 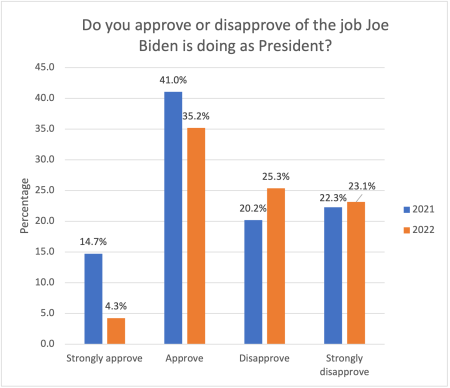 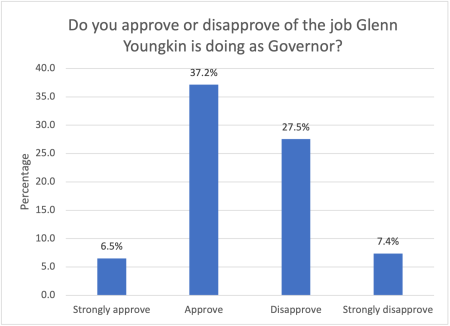 At the time that the survey was conducted, Glenn Youngkin had been governor for several months. Opinions of his job performance were mixed, with 43.7% approving or strongly approving and 34.9% disapproving or strongly disapproving. More than 20% of respondents indicated that they either did not know (15.7%) or refused to answer (5.6%). Since Youngkin received roughly 45% of the vote in the November 2021 gubernatorial election within the seven cities surveyed (217,129 out of 479,886 votes), this level of approval seems consistent with neither major gains nor losses in popularity for the governor at this point in his administration. 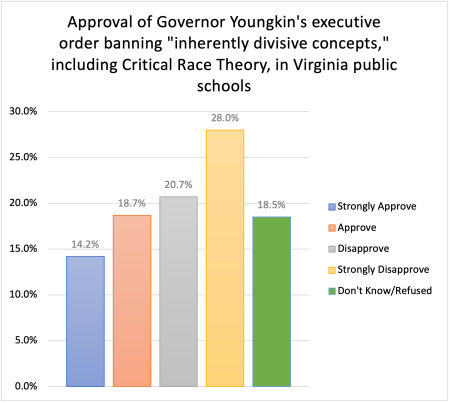 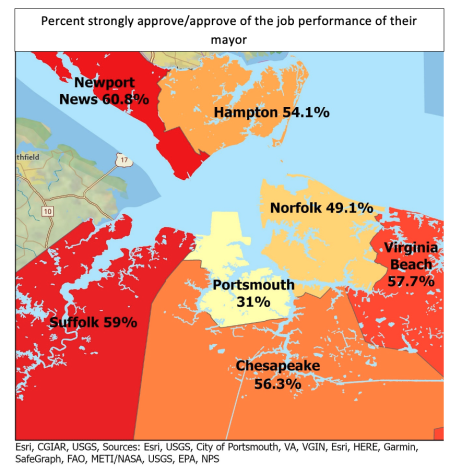 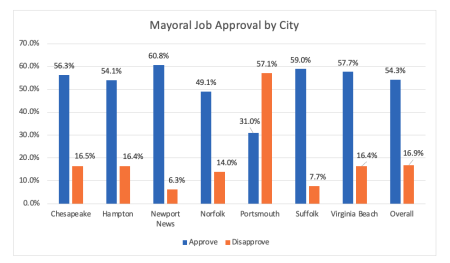 This year, for the first time, respondents were asked to identify their sources of information about local news with the question: “Which of the following sources do you typically use to learn about local news in Hampton Roads?” Respondents could select all that applied from among the following options: local television news; newspapers; internet sites, social media or blogs; radio news or talk shows; and other.  Respondents could also indicate that they do not obtain local Hampton Roads news as well as “don’t know” or “refused.” 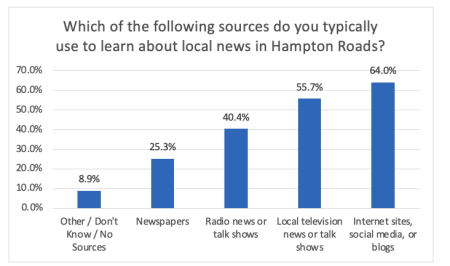 Most respondents selected at least one news source. Among the four sources, newspapers had the smallest share, with one in four respondents (25.3%) indicating that they use them to learn about local news.  Radio news (40.4%) and local television news or talk shows (55.7%) had substantially larger proportions, and internet sites, social media or blogs were the most common source, used by almost two-thirds of respondents (64%). 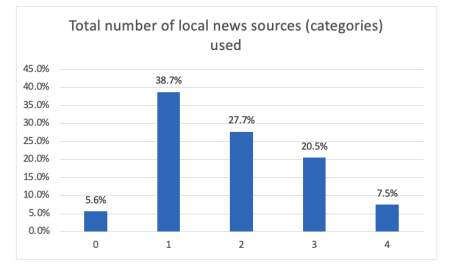 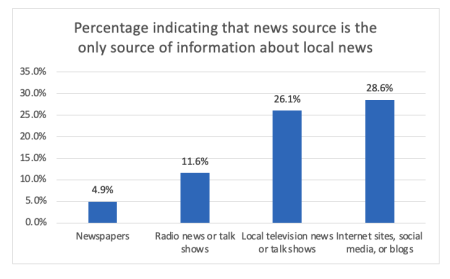 Does it matter how many sources of information one has about local news? More than a quarter of respondents to the local mayor job approval question indicated that they either did not know (22.5%) or that they refused to answer (6.4%).  Perhaps unwillingness or inability to answer the question reflects a lack of information about that performance, in part due to consuming minimal amounts of local news.  More than half of the respondents who consult none of the four categories of news sources did not express an opinion about the job performance of their local mayor (58.3%) while a third or less of the respondents in all other categories did not evaluate the job performance of their local mayor. Failure to attend to local news may render citizens less able to effectively participate in local politics.[1]

[1] Across the different news sources, those who consulted any news source were more likely to answer the mayor job approval question. But the difference was only statistically significant (p<0.1) for newspapers and local television news, and the effect was largest (and most statistically significant) for local television news. One-third (33.9%) of respondents who did not watch local TV news failed to rate their local mayor’s job performance, while only 25% of those who did watch failed to rate mayoral job performance. 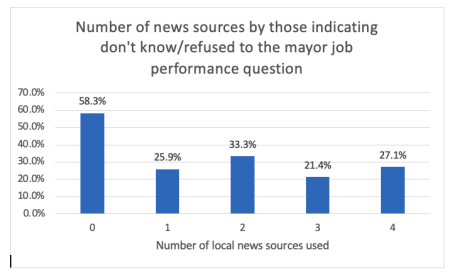