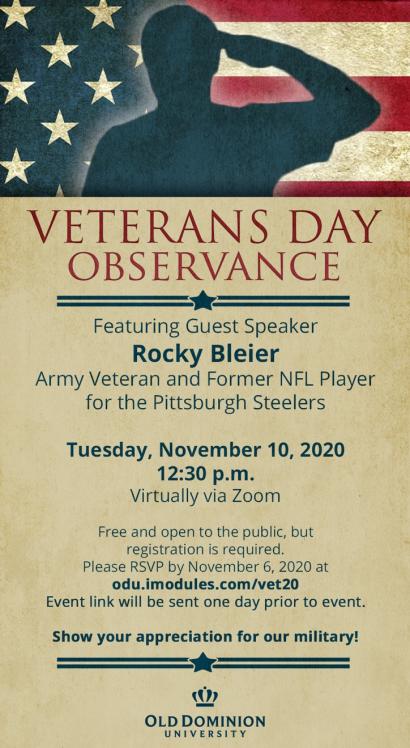 Rocky Bleier, a Vietnam veteran and a key player on four Super Bowl championship teams with the Pittsburgh Steelers, will be the featured speaker at Old Dominion University's annual Veterans Day observance.

Bleier, who played on Notre Dame's 1966 national championship team, was drafted into the Army in 1968 after his rookie season with the Steelers. Wounds he sustained in August 1969 injured both of his legs and cost him part of his right foot.

Nonetheless, he returned to the Steelers in 1970. He finished his career with 3,865 rushing yards, 136 receptions for 1,294 yards, and 25 touchdowns. At the time of his retirement in 1980, he was the team's fourth all-time leading rusher.

Bleier wrote a book about his struggle to recover from his war wounds, "Fighting Back: The Rocky Bleier Story," which was made into a television movie. He has also been a motivational speaker in his post-football life.