On a Mission: NASA Engineer Forged His Own Path 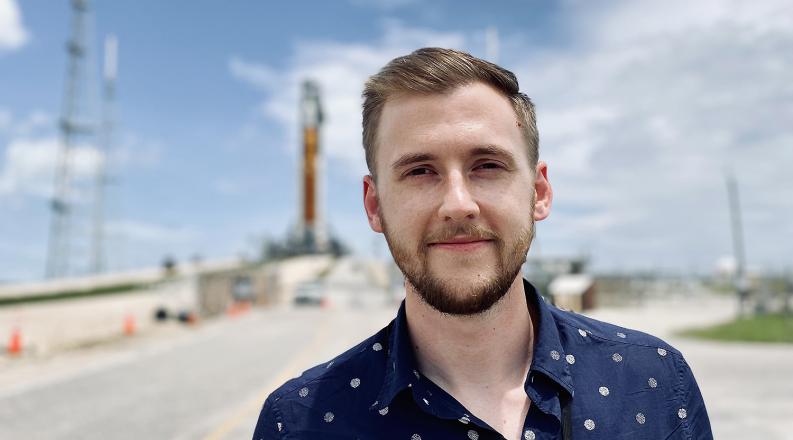 In 1982, the Soviet mission Venera-14 captured the only images taken of the surface of Venus. The United States has never successfully photographed the surface of one of the Earth’s closest planetary neighbors.

“With surface temperatures around 900 degrees Fahrenheit, surface pressure 93 times higher than here on Earth and a toxic chemical environment, things don’t survive for long on Venus,” Haskin said. “VeSPER is hoping to change that by designing, building, and testing a camera system enclosed in a protective casing that can survive the extreme environment on the surface of Venus for a short period of time.”

Haskin’s responsibility is to make sure the enclosure can survive the landing and provide enough support for the camera held inside.

“The science that could be gained from pictures captured with modern camera technology, even if only a few are captured, would be significant,” he said.

In his day-to-day job, Haskin uses software to make computer-based models of spacecraft parts and then applies forces to re-create what the parts will experience during liftoff and flight. “The software then does a bunch of complicated mathematics, and I interpret the results to see if the parts will be damaged,” he explained.

Haskin, who grew up in Yorktown, was introduced to engineering early on. “My dad was always working on engineering-related projects around the house, just drawing up plans by hand and bringing them to life, and I think that is how I first became exposed to and interested in the field,” he explained.

After high school, he chose ODU because of the engineering program’s reputation and affordability. “The proximity to NASA Langley helped too,” he said.

“The VCC experience was a defining part of my education, helping me connect the dots between the theoretical knowledge gained from coursework and the real-world demands of engineering projects,” he said.

Professor Emeritus Bob Ash remembers Haskin’s determination. “When Ian was starting his junior year in mechanical engineering, he brought three other undergraduate engineering students (Alec Ferley, Andrew Hibbs and Dana Lambert) to my office with a proposition: Would I be willing to serve as the faculty advisor for a Micro-G Next competition sponsored by NASA Johnson Space Center?” Ash said. “I was hesitant at first, but when I learned more about their backgrounds and motivation, I became sold.”

The team designed, built and tested a coring device for collecting samples from an asteroid. Their prototype was then tested in the neutral buoyancy facility at the Johnson Center.

To get to NASA full time, Haskin created his own opportunities.

He was interested in a NASA internship in his first year of college. But at the time, NASA Langley Research Center internships were open only to juniors and seniors, with an exception for applicants with 40 or more volunteer hours.

Undeterred, he reached out to an engineer he knew at NASA Langley who offered to take him on a tour of the center. The tour evolved into a four-month student volunteer position, giving him the 40 hours he needed.

During the internships, he worked on a variety of projects related to mechanical design or structural analysis. One project involved designing and 3D printing a full-scale, 50th-percentile human head that could house cameras and audio devices used to evaluate head-mounted display systems for pilots.

Haskin’s experience includes time at Langley’s Landing and Impact Research (LandIR) Facility, better known as the gantry, where he took part in both destructive and non-destructive impact testing of aircraft and spacecraft. His roles varied from developing some of the finite element models used for structural analysis to instrumenting crash test dummies with different load and acceleration measuring sensors.

“The (gantry) experience is hard to describe. It requires a ton of preparation, usually months’ worth of work, for an event that lasts only a matter of seconds,” he said. “It is an adrenaline rush and each test draws a massive crowd of employees from across the center because they are so exciting to witness.

“I feel so fortunate to have had the opportunity to take part in that testing and play a small role in NASA’s mission to return astronauts to the moon.”

Outside of work and school – Haskin is pursuing a master’s in interdisciplinary engineering at Purdue University – he spends his free time weightlifting, hiking, fishing and following Formula 1 racing.

He is thankful for his undergraduate experience. “I loved my time at ODU,” Haskin said. “I learned a lot, met most of my closest friends and made great connections that set me up for success post-college.”