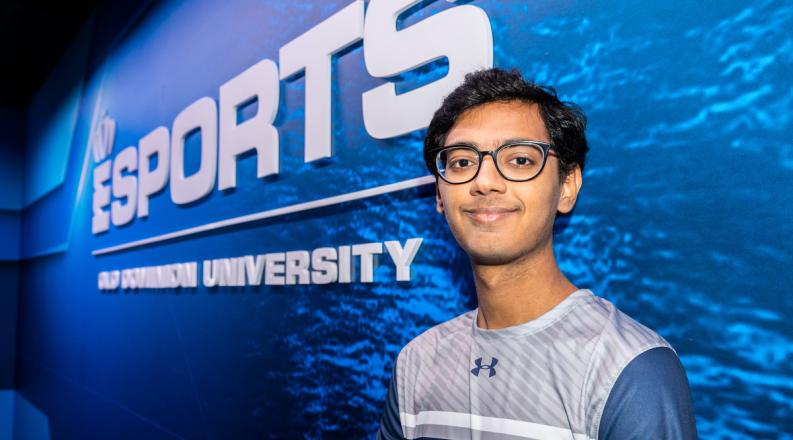 In sports history, there have been many memorable performances by athletes playing through pain or illness.

Who can forget Michael Jordan’s flu game in the 1997 NBA Finals?

Or Curt Schilling’s bloody sock in the 2004 American League Championship Series (well, maybe Yankees fans would like to)?

Shah, a master’s computer science student, is the captain and manager for Old Dominion University's esports Valorant varsity team. Valorant is a multiplayer shooter game and one of the 14 game titles housed by ODU’s Esports program.

The day before his team’s first match of the season, Shah woke up with stomach pain. He thought maybe it was food poisoning, but when he didn’t start feeling better, he went to the hospital where doctors discovered he had pancreatitis – an inflammation that causes abdominal pain, nausea and vomiting.

“They were like, ‘So, you’re gonna have to stay in the hospital for the next couple days,’” Shah said.

When the opposing team refused to reschedule, ODU was in a bind.

“We didn’t have a sub at the moment,” he said. “But when I was taking pain meds, I was able to function and play.”

So, with his doctor’s approval, Shah played from his hospital bed using his sister’s laptop cover as a mouse pad.

“My primary concern was for Nishil’s well-being and finding out what type of support he needed at that time,” said Grant Deppen, ODU’s assistant director of esports. “Once he and I communicated and he expressed that he was doing OK and that the medical staff had given him the go-ahead to play, I was mostly stunned that his internet in the hospital was good enough to stay connected.”

Despite some internet lag and having to take a break for more meds and an IV change, Shah’s team won. With the victory, ODU will continue to compete for a chance to play at a tournament in California sponsored by Riot Games – the creator of Valorant.

Shah credited his teammates for stepping up – something Deppen echoed.

“The Valorant team as a whole is quite talented, so even playing under the circumstances that they were, the outcome wasn’t a surprise,” Deppen said.

“They were like, ‘So, you’re gonna have to stay in the hospital for the next couple days,’” Nishil Shah said.

In 2020, ODU became the first four-year public institution in Virginia to start a varsity esports program, joining the National Association of Collegiate Esports (NACE). The University has approximately 120 varsity and junior varsity players competing in regional and national leagues and tournaments.

Most games have three to five players on each team. Byron Hinson, ODU’s esports coordinator, said Monarch teams have had several deep playoff runs, including national championship appearances in FIFA and LevelNext Madden.

Perhaps the most exciting aspect of the program is the 2,400-square-foot Esports Arena in Webb Center with 50 gaming computers, a game library and consoles open to all students.

“The arena is a hidden gem on campus,” Deppen said. “When we built the space, we wanted to accommodate both our competitive teams, but also casual gamers or students that are looking to advance their skills.”

It’s not all about gaming though – the esports program also incorporates broadcasting, sports management and graphic design skills.

“Because we broadcast many of our competitions live on Twitch, we have a team of student employees that execute the back-end and forward-facing roles,” Deppen said. “Several of them will be both on-screen broadcasters for some games, then behind the scenes for others. We also have a group that’s focused on generating social media content and graphics for the productions.”

Shah said he wants to either go into the game design industry or do something with block chain and crypto currencies.

And while doctors are still trying to figure out what caused his pancreatitis, he’s focused on helping his team make it to the Valorant finals.

“I’m not going to undercut it – it is going to be a hard journey and a climb to the top of the mountain,” he said.

As we’ve learned though, all Shah needs is Wi-Fi and a mouse pad to have a shot at winning.