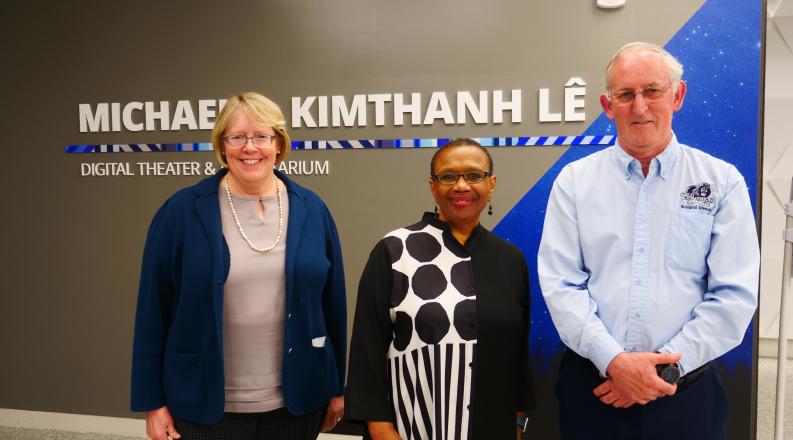 COVID-19 brought the state of public health to the forefront and highlighted disparities in health care access and outcomes. These disparities, though, are not new and have been revealed throughout history by other infectious diseases, according to Dr. Vanessa Northington Gamble, who served as the 2022 speaker for the Daniel E. and Helen N. Sonenshine Endowed Lecture Series in Infectious Diseases, hosted by Old Dominion University's College of Sciences and the Department of Biological Science.

Gamble, an internationally recognized physician, scholar and activist, is the University Professor of Medical Humanities, professor of health policy at the Milken Institute School of Public Health and professor of American studies at George Washington University. She is an expert on the history of American medicine, racial and ethnic disparities in health and health care, public health ethics, and bioethics.

Parallels in Pandemics from 1918 to Today

On March 31, Gamble presented two in-depth talks to students, faculty and the public exploring health inequities during two epidemics and uncovering the life and breakthroughs of an African American female physician and activist in the mid-1900s.

Her first lecture, "Exposing Pre-Existing Social Conditions: African Americans, the 1918 Influenza Epidemic, and COVID-19," centered on exploring how African Americans were impacted in the previous pandemic provides historical context for understanding the "racial dimensions of the contemporary COVID-19 pandemic and its disproportionate impact on African Americans."

Gamble gave examples of how epidemics "continue to lay bare racial and social inequities in the United States." During the 1918 influenza epidemic, African Americans did not receive equal treatment in hospitals due to Jim Crow policies. Black influenza patients and victims received care and burials in segregated facilities. White scientists and doctors "believed theories that African Americans were biologically, physiologically and morally inferior to whites."

"The hospital was not the only Black institution in Baltimore, Maryland, overwhelmed by the influenza pandemic," Gamble said. "At Mount Auburn cemetery, the largest Black burial ground, bodies arrived so quickly that gravediggers could not keep up, and by the end of October, the caskets of over 150 dead African Americans lay unburied, some for as long as three weeks."

The crisis was resolved after the U.S. Army detailed approximately 370 Black soldiers to bury the dead in a mass grave. "These events in Baltimore underscore that the epidemic itself revealed the medical and political inequities African Americans faced as seen in Baltimore but repeated throughout the country," Gamble said. "The color line was so entrenched that African Americans assumed primary responsibilities for providing care to race members struck by the influenza epidemic."

Additionally, Gamble shared newspaper clippings and excerpts from books and papers from African American leaders in Philadelphia and Richmond who pooled resources to provide adequate care to their communities.

"African Americans lacked political and economic power and lived in the least desirable and most disease-ridden neighborhood," Gamble said. "But despite their plights, African Americans created separate hospitals and care facilities to take care of themselves.

"Just as influenza revealed racial inequities in our society in 1918, COVID-19 does so today. Statistics show that a disproportionate number of African Americans are sick and dying from coronavirus and many, many Black families are grieving."

She noted a recent study in the Black Coalition Against COVID revealed "the severity of COVID-19 among Black Americans was a predicted result of structural and society realities and not differences in genetic predispositions."

"Systemic changes must address the separate and unequal health system that has been exposed by COVID-19," Gamble said.

Gamble gave a second lecture on the life and career of Dr. Virginia M. Alexander, a groundbreaker in medicine, public health research, antiracist activism and religion. Gamble is writing a biography about her.

"I want to construct this pioneer to eliminate the substance and character of racist theories and show her as a complex human being with strengths, triumphs and accomplishments," Gamble said.

She took the audience at the Lê Planetarium inside the new Chemistry Building on a journey through the various phases of Alexander's life and career, beginning with her time as a student at the University of Pennsylvania and the Woman's Medical College of Pennsylvania.

Each phase of her professional career was met with hurdles and barriers, but she proved to be resilient.

"After graduating from the University of Pennsylvania in only three years, Virginia left for Kansas City in 1925 to complete her hospital internship because no Philadelphia hospitals would accept her as an intern because of her race," Gamble said.

After completing her internship in the Midwest, Alexander returned to the East Coast and converted part of her home in Brewerytown (North Philadelphia) into a six-bed clinic called the Aspiranto Health Home.

Alexander had difficulty finding equal treatment for her patients from hospitals, but insisted on treating both African American and white patients during the late 1930s and 1940s.

Faith was essential to Alexander. When she was a freshman at the University of Pennsylvania in 1917, she attended her first Quaker meeting. Many of Alexander's white patients were members of the Society of Friends (Quakers).

"She had close friends at Race and Arch Street (Quaker) monthly meetings, and she joined the Fireside Club, an interracial group of white Friends and African Americans dedicated to interracial understanding," Gamble said.

Alexander became the first African American nominated to the Race Relations Committee of Philadelphia Yearly Meeting. As part of her efforts with that committee, she worked to integrate Philadelphia Hospital. After some time, Alexander sought membership at Germantown Friends Monthly Meeting.

"Despite her already respected status in the Quaker community, Friends were once again split in their support of her membership," Gamble said. "In 1931, over one year after she applied (and 14 years after her first Quaker meeting), she was finally approved for membership and became the only African American (Quaker) member Germantown Friends Monthly Meeting."

Over the years, Alexander fought to break down systemic barriers in the medical profession and advocated on behalf of her Black patients. She conducted research on the social, economic and health problems of North Philadelphia, yielding startling results about the health disparities affecting Black patients, including high infant mortality rates and higher death rates for tuberculosis. In 1936, Alexander became the first Black student to attend Yale School of Public Health.

Alexander paved the way for other young physicians and for her colleague Dr. Helen Dickens, who mentors Gamble.

Gamble is the author of several acclaimed publications on the history of race and racism in American medicine and bioethics, is a member of the National Academy of Medicine and National Academy of Sciences and is a Fellow of the Hastings Center. She chaired the committee that led a successful campaign to obtain an apology in 1997 from President Clinton for the United States Public Health Syphilis Study at Tuskegee.

The Daniel E. and Helen N. Sonenshine Endowed Lecture Series in Infectious Diseases was created so ODU students would be able to learn, listen and meet expert scientists in the hopes that they would enter or contribute to the infectious diseases field. 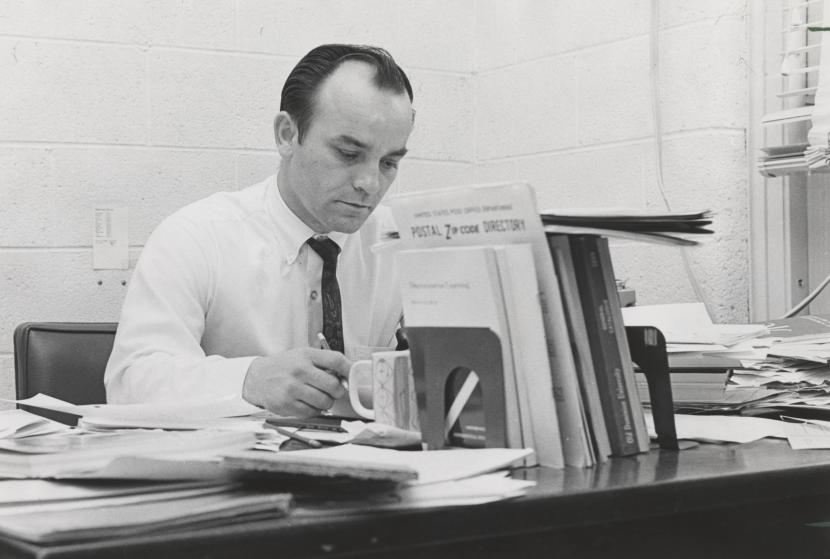 Raymond Kirby, Who Played a Key Role in Transforming the Psychology Department, Dies at 88

He spurred an emphasis on research and championed diversity among faculty and students. (More) 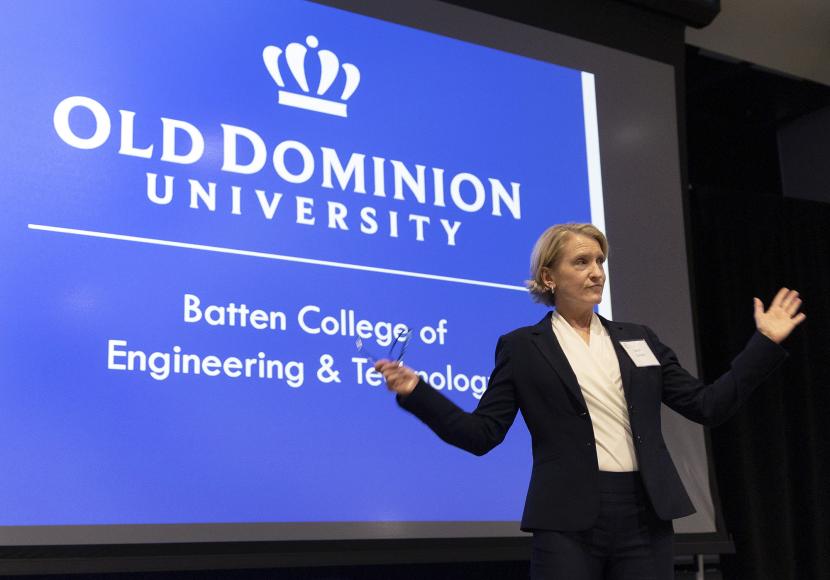 ODU alumna Sarah Golden spoke during the fifth annual Women Excelling in Engineering event at the Batten College of Engineering and Technology. (More) 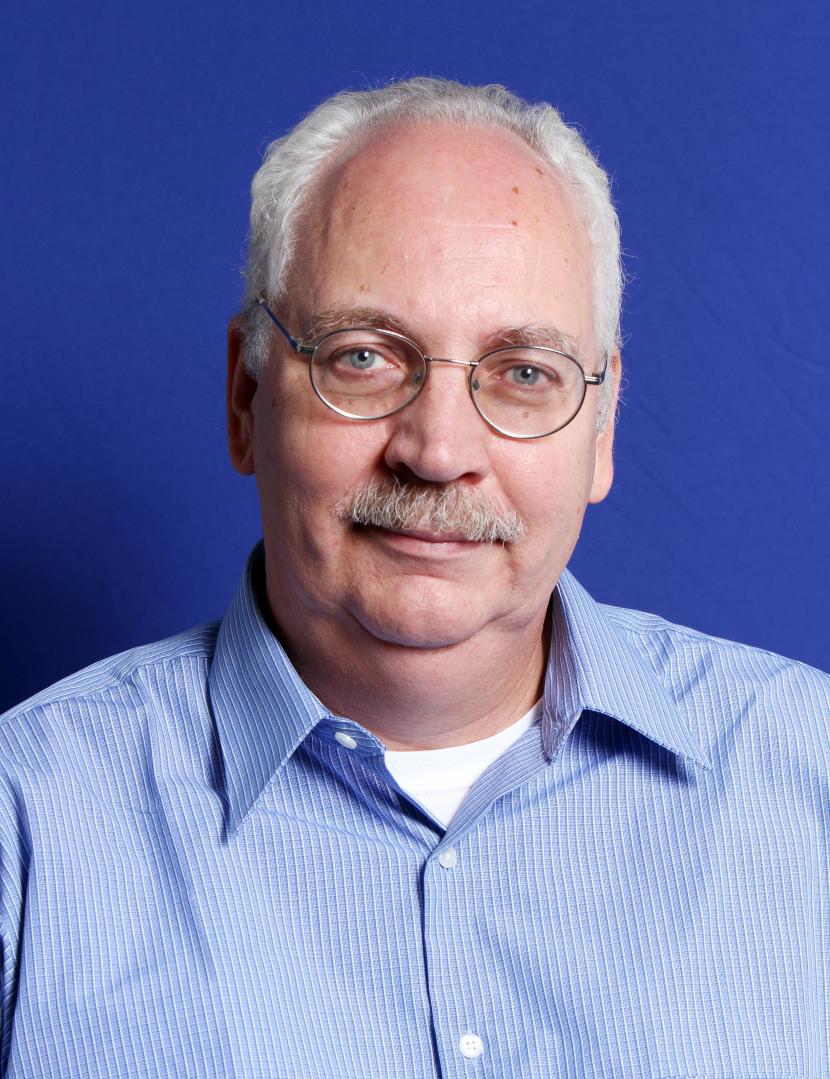