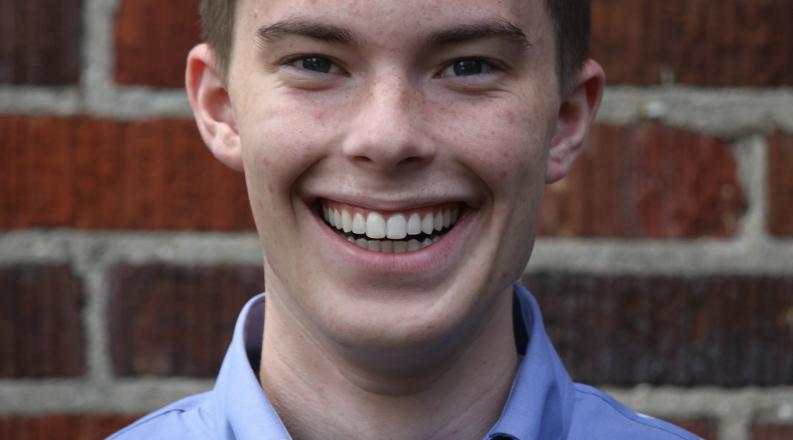 By: Tiffany Whitfield and Daniel Weddle

Summer 2021 held excitement in more ways than one for ODU math major and computer science minor Daniel Weddle, with an internship and a publication in the space of a few months.

Weddle spent much of the summer working for Ferguson Enterprises as an intern focused on data in their supply chain division. While there, Weddle had the opportunity to learn Structured Query Language (SQL) to manage databases and data visualization software, Power BI, using these tools to help streamline KPI (Key Performance Indicator) reporting and develop an interactive instrument for safety stock data visualization. By the end of the internship, the Power BI report—which will continue to be used in the coming year—was drawing from well over two million rows of data.

"The value of the internship went far beyond the technical tools learned, though," said Weddle. "As a student with prior experience largely in academia, this was a terrific chance to get my feet wet in the business realm—to look around, have conversations, see the types of problems that these people deal with, and work on a few myself."

Ferguson's associates played a major role in creating such a positive experience. "My mentors and the senior leadership provided helpful input throughout the internship, and the associates' attitude was welcoming," said Weddle. "Ferguson had a deliberate focus on making the internship valuable for the interns' development, not merely beneficial for the company."

During the eighth week of the internship, all five interns gathered at Ferguson Enterprises's new HQ3 to deliver their final presentations to the supply chain senior leadership. Observing the other interns' presentations and the ensuing discussion provided exposure beyond what Weddle had worked on himself. "The supply chain senior vice president pointed out that our projects were not homework assignments," Weddle recalled. "Rather, they carried weight for those executives, who are dealing with millions-of-dollars decisions; as such, the presentations gave rise to many questions and sparked lively discussion among the leadership team members." Weddle's supervisors supported him in preparing for the task, giving insight into what would be of interest to the leadership team and offering opportunity to practice delivery.

In an encouraging testament to the value that Ferguson Enterprises found in the project, Weddle finished the internship by spending a week creating documentation and transferring the knowledge gained over the summer to an incoming data analyst who has picked up where Weddle left off.

"I highly recommend the experience to other ODU students," said Weddle. He is happy to connect others with the human resources team at Ferguson.

The valuable Ferguson experience wasn't the only highlight of the summer for Weddle. In July, the ODU Undergraduate Research Journal (O.U.R. Journal) published the culmination of Weddle's two-year involvement in mathematical research: a paper coauthored with former visiting Ph.D. student Jianfeng Guo. Titled Fixed-Point Proximity Minimization: A Theoretical Review and Numerical Study, the paper exposits a minimization method put forward in a 2011 paper on image denoising and then presents a numerical experiment regarding algorithm convergence when a parameter bound for theoretically guaranteed convergence is exceeded. The paper is available at https://digitalcommons.odu.edu/ourj/vol8/iss1/10/. "Research was valuable in many ways," said Weddle, "not least because it provided extra motivation in my courses—at the beginning of the research, I was asked to study a paper that used concepts which I hadn't yet reached in my coursework, so when I did encounter them in classes, I realized the importance of understanding them and it was exciting to see the connections."

His advice for other math students is to be proactive in seeking opportunities in the math department.

What's ahead? With one year left at ODU, Weddle is thinking about a career in data science, among other options. He's excited for the math and computer science courses ahead in his final year!