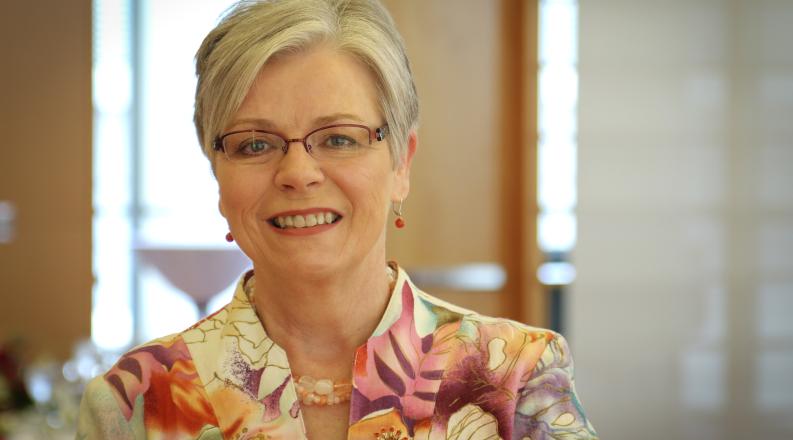 A first-generation college graduate excels in science, business, and non-profit organizations in Hampton Roads for decades.

Lynn Brammer Clements has been a leader in the science field in Hampton Roads for more than four decades. As an Old Dominion University biology alumna, Clements entered a male dominated field in the late 1970s. For some it may have seemed daunting, but she possessed all the elements necessary to thrive in the field. She has since used her knowledge at the Virginia Aquarium, City of Virginia Beach, Slover Library, City of Norfolk and as a mentor to women in the sciences. As an experienced professional who has worn many hats, her love for living things has been her guiding light as she has shattered the glass ceiling over the years.

As a student at Churchland High School, Clements was heavily influenced by her male science teachers to go into science. "I had a good tenth grade biology teacher, Dr. Burton, and I was able to thank him on Facebook the other day and tell him that I had a career in science because of you," said Clements. "He felt that I could study science in college, and I had never thought about that as an option before."

The summer before starting her freshman year at ODU Clements crossed paths with Nick Savage, a renowned local marine science educator. She joined a group of students and instructors Nick and Anne Savage in Jamaica for an in-depth coral reef study. This life-changing experience included looking for nocturnal animals like octopi on night dives and studying how conservation efforts were needed to protect the fragile reef ecosystem. After this course, Clements was certain that she wanted to be a Monarch and study biology. Her trek at ODU began in 1972.

"The study of living things has always been interesting to me," said Clements. "I've always had pets, such as a pet rat, saltwater fish, freshwater fish, and all sorts of animals." At ODU Clements dove into her rigorous studies. There were times when she faced inequalities, but those instances did not deter her from her commitment. "I would work in groups and do most of the work and get a lower grade than the men," said Clements. On the other hand, she had science professors who believed in her as well as challenged her along the way. Professors such as Nancy Wade, Dr. Roy Williams, Dr. Paul Homsher and Dr. Robert Kernell helped her through offering her research opportunities and hands-on experiences. "My professors taught me foundational concepts about the living world that have been helpful throughout my entire life."

When she graduated from ODU in 1976, Clements was the first in her family to receive a college education. With her degree in-hand, Clements had some tough choices to make. "The economy (back then) was kind of like where it is right now. There was a recession," said Clements. "A lot of my biology friends were having trouble finding jobs, so I took a job without having teaching credentials as a teacher." When most women were entering administrative jobs, Clements entered the field of science as a biology teacher. "Most women were going into clerical fields or nursing, especially if you were a science major, you were going to be a nurse, but I decided I wanted to be a science teacher."

Clements started off as a seventh-grade science teacher at William E. Waters Junior High School. The following year she took a biology science teaching position at her alma mater, Churchland High School in Portsmouth, Virginia. After a few years, her tenacity and leadership abilities showed through. "I started the Portsmouth public schools AP Biology program," said Clements. "That was fun, but as the Science Department Head, I was the supervisor of my own teachers, and that was kind of weird at first." Her talent of leading was emerging.

Clements was wrestling with the idea of becoming a principal, but she saw an opening at the Virginia Aquarium as an educator. "I went for an interview when I was eight months pregnant, and then I worked there for a month, and then I had my daughter, and I already had a son," said Clements. As a wife and mother to two young children, Clements managed her time wisely both at home and at work. Over the years, she worked her way up at the Virginia Aquarium. "I did every job there from educator to Director of Marketing, Cultural Affairs, development, and operations," said Clements. "I helped to install the IMAX© Theater, which is now a little passe, but at the time it was very high-tech." She also led the efforts to install a ropes course at the Adventure Park. More importantly, she helped start and raise funds for the research projects at the aquarium. She became the assistant director and then inevitably became the Department director and CEO of the Virginia Aquarium for 17 of her 32 years there. "I was a city of Virginia Beach employee, but also the director of the non-profit, so I wore several hats," said Clements.

While CEO and department director at the aquarium, Clements was also in charge of historic houses and a museum honoring African American schooling in Virginia Beach. African American Virginia Beach students who were not allowed to attend white schools during segregation attended Princess Anne County Training School, later called Union Kempsville High School. "It's commemorated in a museum inside the Renaissance Academy because it was the exact location of the school that the African Americans built by hand themselves. It was a special place with a lot of memories, and it's really neat because they display their yearbooks and really amazing artifacts," said Clements.

She was working at the aquarium when that historic museum opened and when Virginia Beach acquired the Adam Thoroughgood House from Norfolk. "A lot of things happened while I was there that I am really proud of," said Clements. Under her direction, the aquarium built a new parking lot and had several renovations for which she raised 14 million dollars not once, but two times. "I led capital campaigns, the first time was to renovate the Restless Planet, which added Komodo dragons and other exotic animals," said Clements. "And then also, the last thing that I did when I was there was raise some more money for outfitting the marsh pavilion and adding a marine research and animal stranding center."

Clements was an advocate for animal conservation on the national level. In addition to her AZA board service, she was an active member of the World Association of Zoos and Aquariums, and a board member of Species360, an organization that facilitates international collaboration in the collection, sharing and analysis of wildlife.

Clements could have retired after working in Virginia Beach, but she found a new challenge. In 2017 she became the Executive Director of the Slover Library and department head in the city of Norfolk. She leads all aspects of this state-of-the-art 138,000 square foot, $63 million facility that includes the historic 1900 Seaboard building and a six-story modern, dynamic public library. "In my CEO role, I lead 63 staff to operate four creative studios, multiple meetings spaces and exhibitions, a nationally recognized speaker series, a children's library, a teen activity center with gaming lounge, computer and community events and a café and catering services," said Clements.

At Slover, Clements has taken on a new aspect of leading. "I've had the ability to work with all different kinds of people, and that's what I like about the library," said Clements. "We serve people from all around the world right here in Norfolk which has a rich art and cultural vibe." She gets to make an even greater far-reaching impact on a wide array of clientele.

"I was probably a trailblazer, but I didn't know it at the time," said Clements. "My dad told me that I could do anything I set my mind to, and then with people like my high school teacher and Nick Savage telling me that I could do it, and I just did it." She bridged the gap during a time when women were not seen as important to the scientific advancement. For example, in zoos, men were the predominant animal keepers of large animals like elephants, zebras, giraffes and lions. "I can think of times when I was not treated the same as men, but I didn't let it get me down, and it didn't hold me back," said Clements. "I kept persevering." Today, a lot of animal keepers and animal staff are women, and Clements has personally mentored women to fill positions she worked. "Now I'm happy to say that in the 230 or so zoos and aquariums, quite a lot of them are led by women now because they also worked their way up to become directors."

She has also made time to give back to ODU by serving on the College of Sciences' Advisory Board where she is helping to lead an effort to raise an endowment. "I'm pleased to have helped start an endowment that will annually recognize a College of Sciences professor who has gone above and beyond their expected workload. I urge others who have benefitted from the College of Sciences education they received to consider donating to this vital endowment fund." Moreover, she is a trustee for Tidewater Community College and has served on the Virginia Wesleyan University board. She was one of 50 CEOs in the 2017 National Arts Strategies' Chief Executive Program "Community & Culture" sponsored by Harvard University and the University of Michigan's schools of business and the Kresge Foundation.

Looking back over her career, her love for animals and people has grown, and she credits ODU for her success. "Monarch nation has grown and gained national recognition, and I think it is cool that people from all over the world come to learn at ODU," said Clements. All the lessons she has learned over the years help fuel her to mentor this generation of women from entrepreneurs to scientists.

Being a woman has not hindered Clements in any way but has been her greatest asset. "I also find being a woman sometimes does help because you have an empathetic feel for people," said Clements. "Being a mother and a grandmother helps with that, plus I really believe in what I'm doing, and you can't fake that."