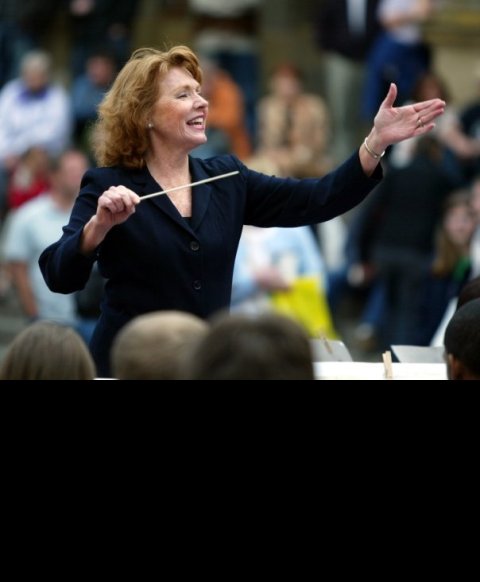 Dr. Nancy Klein is a native of Virginia, receiving her early music education in the Fairfax County Schools. She earned the B.S. in Music Education from the University of Richmond (cum laude), M.M.E in Vocal Performance from EKU (honors), Ph.D. in Music from NYU (valedictorian). While in New York she served as the Assistant Director/ Director of the NYU Choral Program. Dr. Klein has studied conducting and has performed as a soprano with Eric Ericson, Robert Shaw, John deRevere and James Erb. Dr. Klein has directed the ODU Choral Department since 1986. Under her direction, the University Choir and Diehn Chorale have performed in St. Giles Cathedral, Scotland; Carnegie Hall; Avery Fisher Hall in Lincoln Center; St. Patrick’s Cathedral; Tokyo, Japan, and throughout Italy. She has prepared Choirs for Combined Armed Forces performances, conducted the Continental Army Band and directed choirs/bands on the USS John C. Stennis, USS Enterprise and USS North Carolina. She recently conducted Mozart’s Solemn Vespers before a sold out audience at Avery Fischer Hall, Lincoln Center and is the regular conductor for the Sound of America Honor Choir, performing in the Cathedral of Notre Dame, St. Mark’s Basilica, and numerous concert halls throughout Europe for four tours. Dr. Klein is much sought after as a guest conductor and vocal clinician. She is recognized nationally by “Who’s Who in America,” “Who’s Who of America’s Teachers,” “Who’s Who Among Women in America” and “Who’s Who in Entertainment.” She is the 2013 recipient of the ALLI Lifetime Achievement Award, presented by the Cultural Alliance of Greater Hampton Roads (Southeastern Virginia). Dr. Klein has received numerous teaching awards; including the prestigious Joel Lewis Award for Excellence in Student Mentoring and the Robert Stern Award for Excellence in Teaching and most recently was awarded the University Professor designation for preeminence as a teacher. Dr. Klein is currently Professor of Choral Music and Graduate Program Director for the Department of Music at Old Dominion University in Norfolk, Virginia.

B.S. in Music Education, Westhampton College of the University of Richmond, (1976)