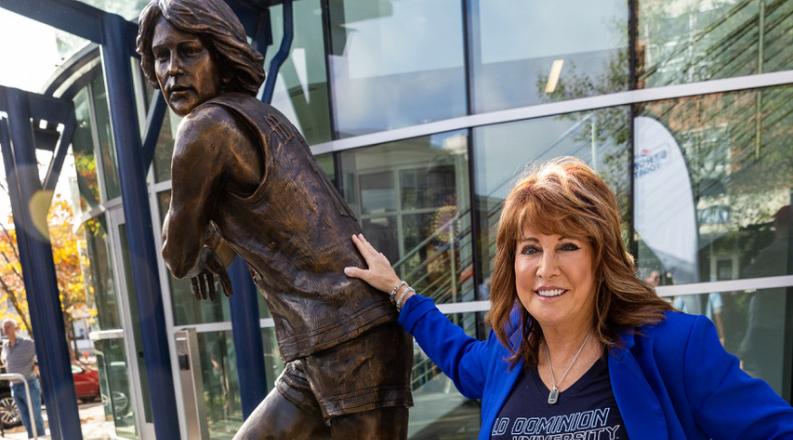 Most of the Old Dominion University community knows Nancy Lieberman as a self-assured, outgoing woman who speaks her mind. The former basketball star-turned-entrepreneur has been a coach, broadcaster, businesswoman and a passionate and articulate voice for women’s sports.

She was quiet and hostile. She was so angry about her difficult childhood that during practices she would “beat up my teammates every day.”

On Nov. 5, when she spoke before ODU unveiled a statue of her, she admitted to a crowd of about 300 well-wishers “that when I came to Old Dominion, I was broken.”

Thanks to her teammates, coach Marianne Stanley, a village of friends and three very special people who became her surrogate family, Lieberman was healed at ODU.

“I would not be the person I am, I would not have the life I have now, if I had not come to Old Dominion University,” she said.

Nicknamed “Lady Magic” when she arrived at ODU, she and her teammates did much to popularize the women’s game.

As a freshman, she led ODU to a 23-9 record, the finest in school history at the time. In her final three seasons she was paired with Stanley, and their chemistry was electric. Teaming with Inge Nissen and later Anne Donovan, the Lady Monarchs won two national championships and a WNIT and 102 of 108 games.

They put ODU on the national map.

“We were America’s team,” Lieberman said. “Everywhere we went, we had fans there.”

Debbie White, who ran ODU’s sports information staff for decades, said she took Lieberman, Nissen and Donovan to New York for talk-show appearances, including “Good Morning America” and the “Today” show. “They were so hot. Everyone wanted to talk to them,” White said.

She became the first woman to play with a men’s professional basketball team, the first to coach a men’s team and something of a national celebrity.

Yet as a child, she struggled.

Lieberman grew up in the Far Rockaway neighborhood of Queens, New York. Her mother, Renee, was single and did her best, but it was not uncommon for Lieberman to come home to a house without electricity or food in the refrigerator.

Her father was not a major factor in her life.

Her mother was a product of her times and tried to put Nancy in dresses and force her to play with dolls. Nancy would have nothing to do with that. Instead, one day she fashioned a helmet out of a New York Jets lamp and played football with the boys until the helmet broke.

When she turned to basketball, she’d get on the subway and head to Harlem to take on much bigger and older men on the playgrounds. They were all African Americans who identified with the Jewish kid with a chip on her shoulder and took care of her, often riding with her back to Queens to make sure she was safe.

Lieberman didn’t realize it at the time, but she needed a surrogate family, people who would love her and take care of her. When she came to ODU, she met Harry Lozon and his wife, Pam, early during her freshman year.

They opened their home to her. They gave her a bedroom, keys to the house and an open invitation to essentially join their family.

“She had a tough life,” Pam said. “She didn’t have a bad life. She just didn’t come from a lot. She wanted a family. She wanted to be around Harry and me and the boys.”

Harry is an ODU Hall of Famer, a former star men’s basketball player recruited by Sonny Allen who was at first put off by Lieberman’s attitude. But he quickly realized she needed nurturing.

“We loved her then and still love her,” Harry said.

That was apparent when Lieberman spoke Saturday morning just before the statue was unveiled.

She began to cry when it came time to thank the Lozons.

“In this life, you can have a biological family and you have a chosen family,” she said. “They were my chosen family.”

At that point, she choked up.

“They are the only people who could make me do this,” she said of the tears. “I know most people think I’m a badass, which I am. But the fact is, Harry and Pam, you allowed me in your home. You took care of me. You bought me things.”

“You treated me like you did Jason and Chad,” she added, referring to the Lozon children. “You opened your house and your hearts to me. I’m so grateful.”

She also found a surrogate brother, though in an unusual manner.

She was hanging out with some ODU men’s basketball players at Webb Center during a rainstorm when she noticed a guy walking up the outside steps with an umbrella that only had the spikes – the cloth had been torn away.

He fell down the stairs twice and ran into the door. He walked up to her, and she noticed he had shoes with detached soles and the initials TGIF written on top. “I later learned it stood for toes go in first,” she said.

“He walks in and he’s like pretending that he’s putting snot on me and doing all of this disgusting stuff, kind of rolls me on the ground. I said, ‘Who the hell is this guy?’ The guys are all laughing.”e w

It was Wes Lockard, an ODU student and, she would learn, a jokester extraordinaire. Wes wore a seagull outfit to basketball games to promote a local radio station and later became an award-winning mascot for a decade each with the New Jersey Nets and Miami Heat.

He passed out confetti and party noisemakers to the crowd the morning the statue was unveiled.

“Whenever I see Charles Barkley, he asks me if I’m still in touch with that guy who used to be that crazy mascot,” Lieberman said. “All of these years later, Wes and I talk at least once a week.”

Lockard lives just north of Miami, not far from where Lieberman’s mother used to live, and “he was good to my mom,” she said. Renee Lieberman died this year.

Lieberman hasn’t forgotten where she came from. She has done much for kids who grew up in neighborhoods like Far Rockaway.

Nancy Lieberman Charities has raised millions of dollars for scholarships, to run basketball camps and build outdoor basketball courts around the country. With help from the Pepsi Stronger Together program, Lieberman dedicated her 116th Dream Court at the East Ocean View Recreation Center on Nov. 4. It is the third Dream Court in Hampton Roads.

ODU President Brian O. Hemphill, Ph.D, Norfolk Mayor Kenny Alexander, former athletic director Jim Jarrett and dozens of her friends and former teammates were among those who gathered to watch the unveiling of the 6-foot-tall bronze statue of Lieberman just outside the Mitchum Basketball Performance Center.

Famed sculptor Brian Hanlon crafted the statue. When he met Lieberman at the Naismith Basketball Hall of Fame 20 years ago, told her that “someday we’re going to put a statue of you on the ODU campus.”

“I thought he was crazy,” Lieberman said.

Hanlon and Lieberman praised President Hemphill and Wood Selig, ODU’s director of athletics, for working with Hanlon and finding a high-profile spot for the statue.

“They didn’t have to do this,” Lieberman said. “I’m so grateful to President Hemphill, Dr. Selig and everyone here who helped make this happen.”

Selig told the crowd that ODU has statues of lions, mermaids and Big Blue, “but that this statue is the first on campus of a human being.”

ODU and city officials also unveiled a street sign at the corner of Hampton Boulevard and 43rd Street where a portion of 43rd Street was renamed Nancy Lieberman Pass.

“When I was 18, I didn’t know anything,” she added. “I knew that I needed to get out of my ‘hood. I needed to grow up. I needed another direction in my life.

“I didn’t have the confidence and self-esteem to be who I was really meant to be. Trust me, God doesn’t make mistakes. I was at the right person at the right time in the right job in this life. I didn’t get it at 18. But I get it now.”

Thanks in part to her ODU family.