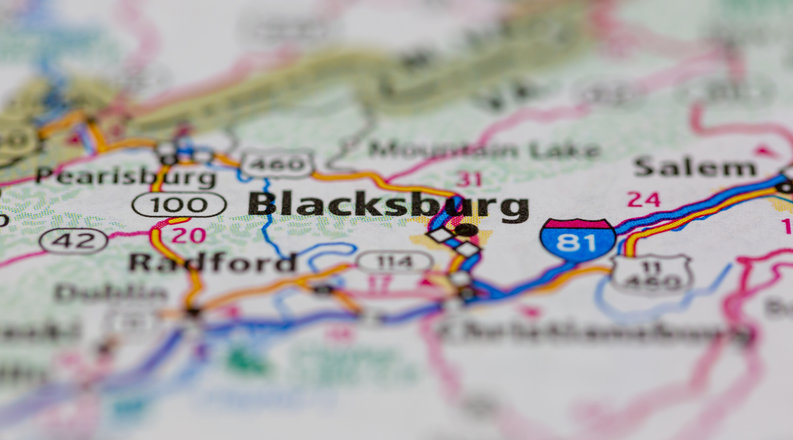 Virginia’s population, power and wealth are increasingly concentrated in an area called the “crescent,” the semicircular geographic regions of Northern Virginia, Richmond and Hampton Roads.

However, authors of Old Dominion University’s State of the Commonwealth Report argue that there is a broader story to be told about Virginia.

In a chapter of the report, released Dec. 18, the State of the Commonwealth examined the Blacksburg-Christiansburg Metropolitan Statistical Area (MSA), a collection of cities and counties on southwest Virginia that encompasses the city of Blacksburg and Virginia Tech.

Unique in Virginia in that its population growth and increasing influence are not due to its proximity to other metro areas, Blacksburg-Christiansburg has carved its own economic path.

State of Commonwealth lead author Robert M. McNab, director of the Dragas Center for Economic Analysis and Policy, said that path has made it a standout among Virginia’s metropolitan areas.

“The Blacksburg area has not only recovered all the jobs lost during the pandemic shock of 2020, its job growth in 2022 helped the region’s economic performance surpass that of the state and the nation,” McNab said.

According to the ODU report, data show a sustained recovery for the region in 2021, continuing into 2022, with unemployment below 3%, and more jobs in the second half of 2022 than before the advent of the COVID-19 pandemic.

One of the confounding variables in economic analysis of a metro area like Blacksburg-Christiansburg is the presence of a massive, land-grant university, Virginia Tech and its 37,000 students (along with Radford University and its nearly 8,000 students). These students are more likely to, statistically, fall below the poverty line and pay inflated rates for housing. Virginia Tech is also a generator of significant economic activity for the region, with investments in research, as well as the outlay required to support a faculty and staff salaries. Virginia Tech is the MSA’s largest employer, Radford University is third.

This economic largesse is threatened by a demographic phenomenon nationwide known as “the cliff,” a sharp decline in freshman enrollments starting in 2025, the byproduct of a decline in birth rates during the Great Recession of 2007-09.

Much like Old Dominion University’s home Hampton Roads, Blacksburg-Christiansburg is heavily dependent on federal spending, while concentrated in education instead of this region’s defense focus.

“Diversification of the economic base, by continuing to support innovation and entrepreneurship by leaning into its existing strengths, appears to be a wise course of action,” the report said.

Produced by the Dragas Center of Economic Analysis & Policy, the State of the Commonwealth inserts data into discussion of life in Virginia through a number of lenses. For more information about the Dragas Center and its other reports, see www.ceapodu.com.