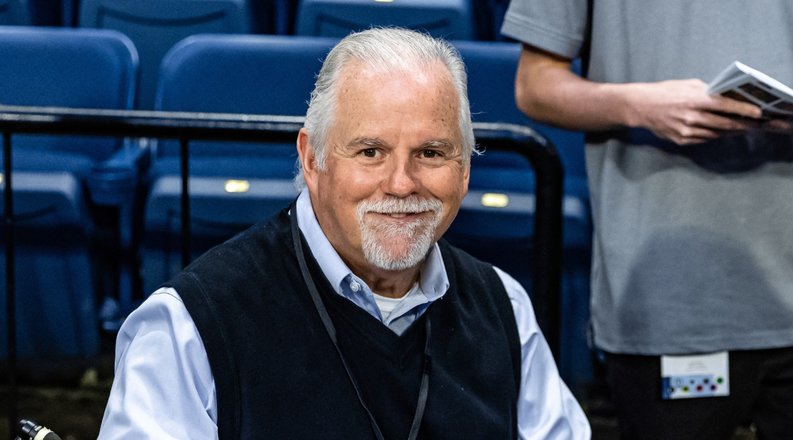 But for many ODU fans, Ted Alexander, the lead radio broadcaster for Monarchs men’s basketball and football for more than a decade, is the voice of ODU athletics.

Since being hired full-time at ODU in 2011, he’s covered ODU sports on many platforms. He’s done thousands of videos, podcasts, coaches’ radio shows and game broadcasts for everything from football and basketball to women’s soccer.

He’s emceed hundreds of events, including nearly every athletic press conference and banquet.

So it came as no surprise to people in ODU athletics when it was announced last week that Alexander will be one of the newest members of the Hampton Roads Sports Media Hall of Fame.

He joins previous ODU inductees Debbie White and Carol Hudson, who worked for decades in sports publicity, in the hall of fame, located at Langley Speedway in Hampton.

Alexander’s trademark is the unorthodox yet compelling way he does play-by-play.

He's energetic without being over the top. He talks nonstop, spitting out one-liners, stats and trivia. Along the way, gives ODU fans compelling play-by-play descriptions.

"Ted was a DJ when he broke into the business. And that's what Ted is, a DJ. He's a DJ doing play-by-play," said Andy Mashaw, the Norfolk firefighter who does color commentary for ODU football. "I don't know anybody else who could pull off that style like he does, but he does it so well."

And if the Monarchs aren't playing well, he'll say so.

"That's unusual for a broadcaster who works for a university,” said Dave Twardzik, the former ODU All-American who’s the color commentator on basketball broadcasts. “But Ted values his credibility."

James Witham, the sideline reporter and color analyst for ODU football games, said, "Our football broadcast is one of the most straight-up and honest out there.

"When you listen as a fan, you want to hear the truth. And if something needs to be said, he'll say it.”

Alexander uses unique phrases that can leave listeners scratching their heads. When he figures that a game is in hand, he says, "The dress is in the bag."

If you're baffled by that, you’re not alone. It refers to an obscure line uttered in an episode of the "Little Rascals."

One of his most memorable lines came in ODU's stunning 49-35 upset of nationally ranked Virginia Tech in 2018, seconds after Jeremy Cox ran 40 yards for a touchdown with 1:34 left.

After describing the TD, Alexander allowed a moment of silence.

Then he said: "Check, please."

Alexander is rarely a man of few words, but was humbled when asked about the hall of fame induction.

"It's a great honor," he said. "It means you've been around the block for a while. I don't get a lot of awards. It's nice to be recognized."

Broadcasting is a crazy and sometimes cruel business, as he learned before coming to ODU.

He won Emmy awards and was lauded for his creativity – he once delivered a radio broadcast from a hot-air balloon. On another occasion, broadcast for almost a week on top of a fast-food restaurant.

But he was twice fired and had to quickly find another job to support his wife, Laurie, and two daughters.

When asked about the best line he ever delivered, Alexander said:

"Why did you fire me?" he replied.

Twardzik said family comes first for Alexander. He spends as much time as he can with Laurie, who has so far been successful in her longtime fight against cancer.

"Ted has his priorities straight," Twardzik said. "He loves his job, and he loves Old Dominion. But that's all secondary when it comes to his wife and two girls.

"Ted is a great family man."

And is now a hall-of-fame sportscaster.

You can read a longer version of this story on the ODU Athletics website.