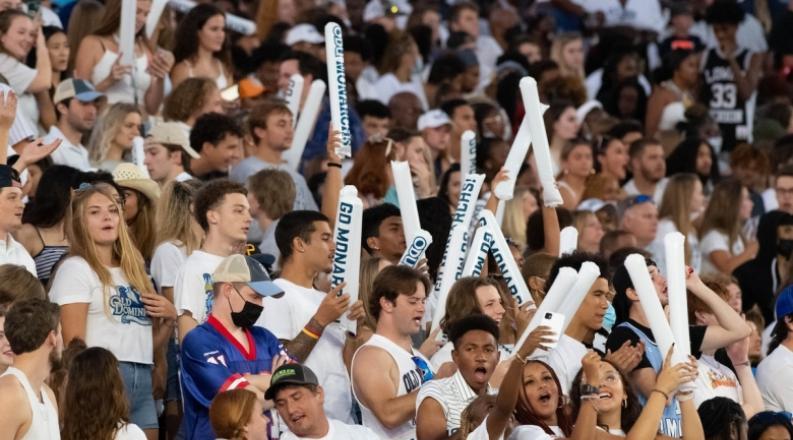 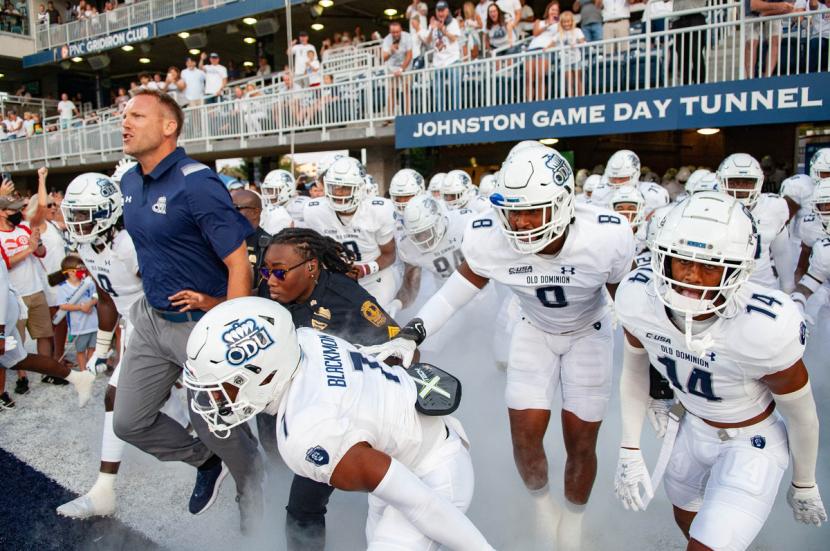 Coach Ricky Rahne leads to the Monarchs onto the field. It was the team's first home game since 2019. Photo Chuck Thomas/ODU

And it's going to be a blast.

ODU's students responded like never before. More than 5,000, the most ever to turn out for a home game, poured into the sideline stands and north end zone to watch the Monarchs rout Hampton University 47-7.

ODU officials had to cut online ticket orders off Saturday morning when the number surpassed 5,000 because most of the 21,944 seats at S.B. Ballard Stadium had already been sold. More than 2,000 students requested tickets Friday.

But hundreds more showed up at the gate with their student IDs and got into the stadium.

Coach Ricky Rahne said he was too focused on getting his team ready to take much notice of the crowd. But the students? They got his attention.

Rahne asked thousands of ODU freshmen and sophomores during a spirit rally the first week of school to wear white, stand and make a ton of noise. And they did, at least until the game got out of hand. Nearly every student came dressed in white.

They clapped thousands of Thunder Sticks together. They screamed and yelled, and even though ODU led Hampton 34-0 at halftime, most of the students stayed until the Monarchs made it 41-0 midway through the third quarter.

Rahne came to ODU from Penn State and said it's the student body that makes Beaver Stadium such a difficult place to play.

"The students were awesome," Rahne said. "They were loud, and they were active. And they were in white. That was special.

"If our students can do that, get 5,000 people in there and be raucous, that would be awesome. This should just be a big party. We want the students to know this is where they are going to be on Saturday night."

Nate Laurin, a junior environmental science major from Virginia Beach, showed up 45 minutes before the game to get a good seat.

"I missed football last season big time," he said. "I love being here. Football is a really big deal at ODU."

But for many students, it wasn't just about football. It was about the things you're supposed to experience on campus that were lost last year because of the pandemic.

That hit home with Dahris Tinsley, a junior from Fluvanna County, and his friend, Devan Glasgow, a sophomore from Fluvanna.

Both were on campus last year when the pandemic forced ODU to put classes online. All athletic events and many student activities were canceled or held via Zoom.

Tinsley and Glasgow went home in the spring to take classes online.

"They said classes were coming back on campus and that football was coming back, so I came back this semester," Tinsley said. "So far this year, things have been pretty good. Things have opened back up and it's a lot safer."

Glasgow said he missed football "in a big way. We've been waiting a long time for this game. And things on campus are so much better. It's been a great semester so far."

The game drew a crowd announced at 18,363 and hundreds were lined up in their cars at 2:30 p.m., 30 minutes before the tailgate lots opened, eager to get back to eating, drinking and enjoying camaraderie with other fans.

Among the largest was a group that calls itself "The Monarchists," about 15 or so fans who met on Twitter and who tailgate in the "blue" lot adjacent to WHRO-TV. They brought six cars and trucks and about 30 people, who enjoyed beverages, brats, fried chicken, hamburgers, barbeque and other tailgate fare.

They also shared something else that was in abundance on Saturday, the 20th anniversary of the 9/11 terrorist attacks - a renewed sense of patriotism. Usually, the lots are full of ODU flags waving from atop portable poles, but dozens were topped by the American flag.

"It's a complex day," said Brittany Williams, a Virginia Tech graduate who nonetheless is also an ODU fan because her husband, Gary, is a Monarch alum.

"There's a sadness you will always feel on this day. But at the same time, there's excitement about this game. We're living what America is all about here today. We hope people can remember that."

A parachutist brought the American flag to the field minutes before the game as the crowd chanted "USA, USA." There was a video replay of the parachute drop at halftime that ran as "God Bless the USA," sung by Lee Greenwood, played in the background, which brought cheers from fans.

In part to lure fans back to football games, ODU expanded its offerings on Kaufman Mall, including a beer garden next to a giant TV showing college football. There was an ESPN Zone, full of adult games, in addition to bounce houses where dozens of kids expended megawatts of energy.

The DeLoreans, a cover band that does songs from the 1980s, played for a couple of hours, and hundreds juked to the music. There will be concerts at every home game.

"This is the fullest I've seen Kaufman Mall in years. What they've done here is just fantastic," said Jonathan Lazauskas, a recent ODU graduate who came dressed in a Taylor Heinicke jersey, silver makeup and a blue wig. His father, Gary, was dressed similarly.

Gary said they missed ODU football terribly. "We stayed at home" last fall, he said. "We didn't watch too many games on TV. Football without fans just isn't the same.

"But we're enjoying this so much. Football is back, and we're loving it."

Ray Wittersheim, one of ODU's most high-profile fans, was in the "silver" lot adjacent to S.B. Ballard Stadium serving food and drinks to passersby. He's known as the "Juice Man," because he holds up a carton of Tropicana orange juice every time the football players do their "Monarch Walk" to the stadium before games.

"Not having football last year, it was like missing Christmas," he said. "I spent last fall sitting on my porch, trying to figure out what to do. I drove my wife (Caralyn) crazy. We got through it, but I missed this so much."

Lucille Mulich turned 80 Saturday and spent the afternoon tailgating not far from Wittersheim.

She sat in an easy chair, taking in the sights, as her daughter, Michele, cut her a piece of cake. Michele, by the way, was one of the original donors who helped get football off the ground in 2009.

"There's no place I'd rather be" for her 80th birthday, Lucille said. "I'm so glad football is back." 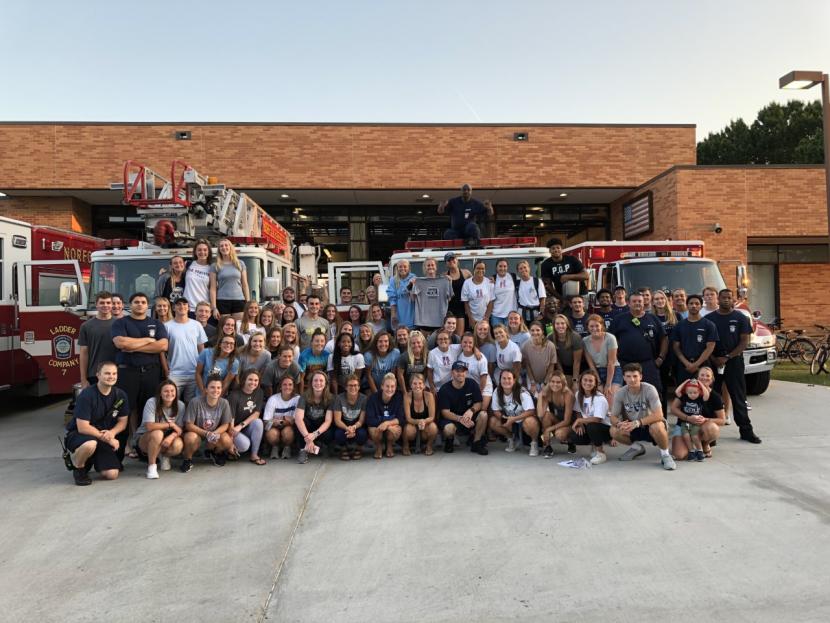 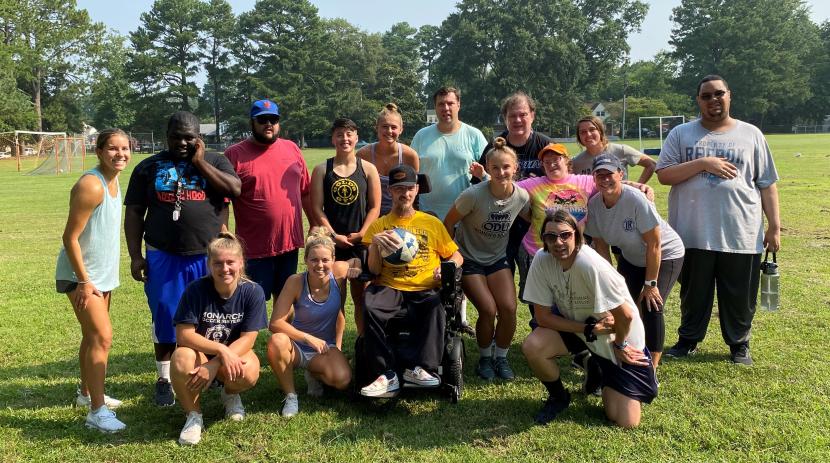 Senior Morgan Hall put together soccer league and helped set up a field hockey day on the University’s athletic fields this summer. (More) 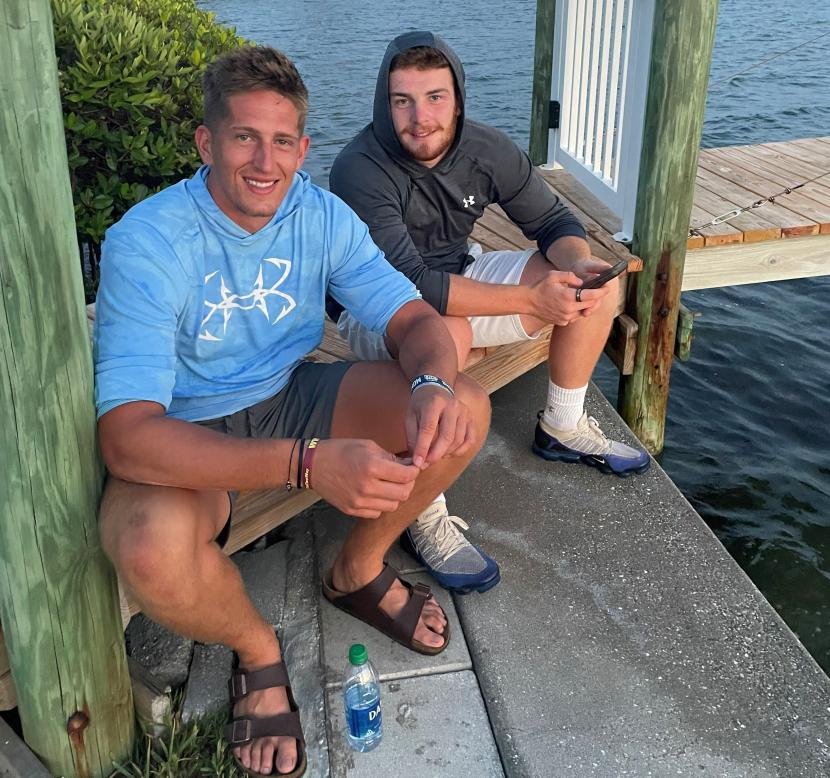