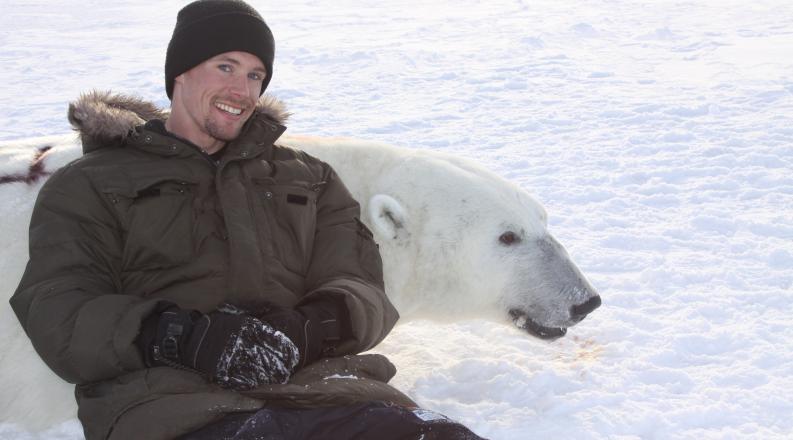 Whiteman, who teaches in the Department of Biological Sciences, has been named the new chief research scientist for Polar Bears International (PBI).

"This exciting new position with Polar Bears International extends the work that I do here at Old Dominion University, giving me additional opportunities for collaboration, research and outreach," Whiteman said. "Polar bears have become important symbols of climate change because of the impacts of Arctic Sea ice loss."

"His expertise on animal adaptations to changing resources and environmental conditions, as well as his past research with polar bears, has prepared him very well for this prominent new role," she said. "He is an excellent science communicator and will be a tremendous asset to PBI."

Also joining PBI's team are Flavio Lehner, an assistant professor in earth and atmospheric science at Cornell University, who will be the chief climate scientist, and Amy Cutting, who will be the vice president of conservation.

"Both Dr. John Whiteman and Dr. Flavio Lehner bring extensive knowledge about polar bears, sea ice and the impact of climate warming on the environment and ecosystems," said Steven Amstrup, PBI chief scientist. "They have a passion for conservation and moving us toward sustainable ways of living."

Whiteman's appointment comes just before Polar Bear Week, which is Oct. 30 through Nov. 5. During that time, the PBI team, including Whiteman, will conduct field research at Hudson Bay in eastern Canada. As a bonus, the group will broadcast Tundra Connections, where students can tune in for live webcasts and chats with Whiteman and other PBI experts. And scientists will continue to install ground-based radar systems designed to send alerts that prevent encounters between people and polar bears.

"In addition to local human-wildlife conflict over the coming decades, it is certain that continued ice loss will eventually have dramatic negative impacts on bears, because they simply cannot live without sea ice," Whiteman said.

At ODU, Whiteman teaches animal biology and trains graduate students and postdoctoral scholars. He is also a Conservation Fellow with the San Diego Zoo. His recent projects have included discovering that the immune system activity of polar bears increases when they use terrestrial habitat and quantifying how changes in polar bear body condition can influence reproductive choices, such as prioritizing health over raising cubs. His 2015 study published in Science refuted a long-standing hypothesis that polar bears enter a "walking hibernation" state during summer. Instead, he and his co-authors found that polar bears in the Southern Beaufort Sea must endure food deprivation when the summer sea ice retreats to the deep water of the central Arctic basin; this project was the first major expedition to follow polar bears north into the Arctic ice cap via icebreaker-based helicopters.