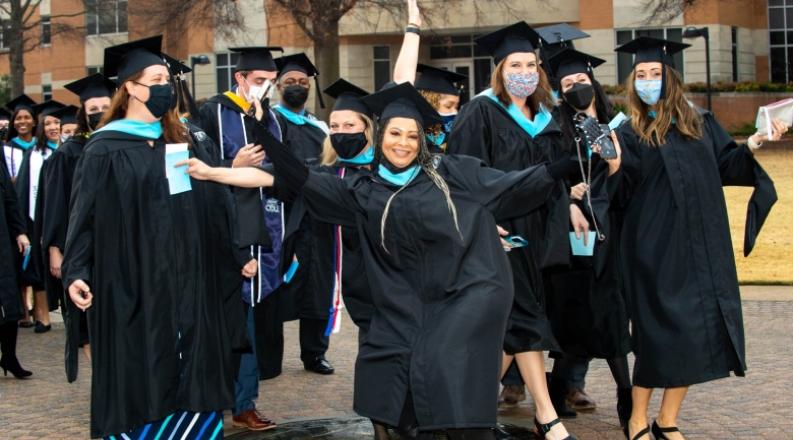 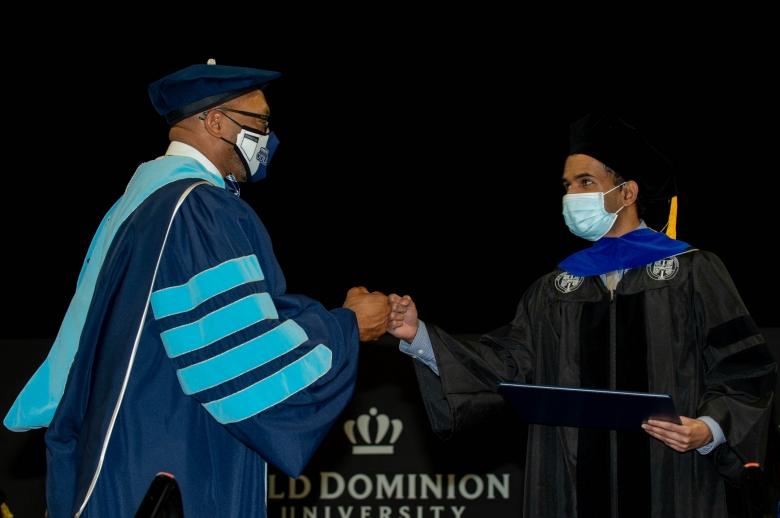 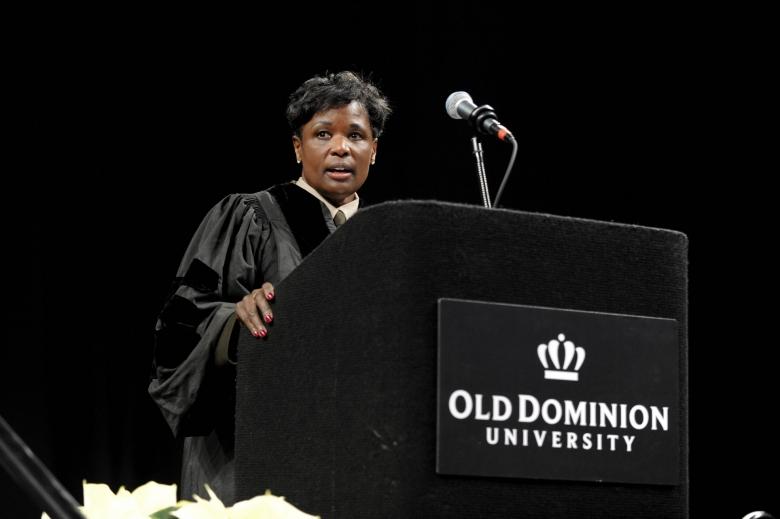 Lt. Gen. Donna W. Martin ‘88, the 67th Inspector General of the U.S. Army, spoke at the 9 a.m. ceremony for the Darden College of Education and Professional Studies, Batten College of Engineering and Technology, College of Sciences and School of Cybersecurity. Photo Chuck Thomas/ODU 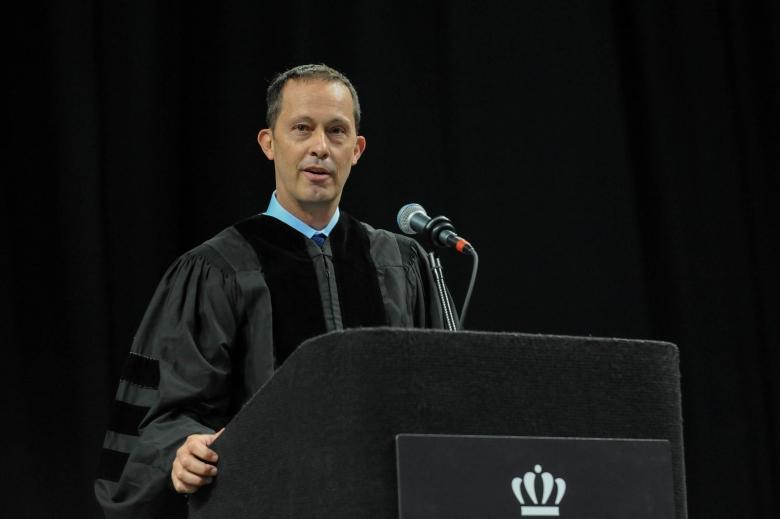 Two ODU alumni delivered remarks at the first graduation ceremonies at Chartway Arena in two years due to the pandemic.

At the 9 a.m. ceremony, Lt. Gen. Donna W. Martin '88, the 67th Inspector General of the U.S. Army, spoke to graduates of the Darden College of Education and Professional Studies, Batten College of Engineering and Technology, College of Sciences and School of Cybersecurity.

At the 2 p.m. ceremony, Scott Cooke '93, '96, group vice president and chief financial officer for Toyota Financial Services, spoke to graduates of the College of Arts and Letters, Strome College of Business and College of Health Sciences.

"Throughout your personal and professional lives, you will have an opportunity to meet a diverse cross section of humanity," he told the graduates. "I am confident the world will find in you what they find in so many Monarchs: a dedication to lifelong learning, a champion of social justice and a passion for making a lasting impact and a positive difference in the lives of others.

"Your time at ODU developed your ability to listen with a critical ear and think with an open mind. This institution has prepared you for a life of service, not only to self and family, but to those in need.

"I am confident you will take your Monarch values with you on the journey ahead."

Martin, who earned a Bachelor of Science in criminal justice from ODU, reflected on her graduation.

"It is such an honor for me to return to the place that was instrumental to my becoming," she said. "1988 seems so long ago. And, yet, when I look into the eyes of the class, I still see myself."

But she told the graduates that "my generation was not facing any of the challenges you will face when you step off this campus and begin to become."

She implored the graduates to be agents for change.

"No generation has been better positioned to be great warriors for justice and change," she said. "I've seen firsthand the power of a movement led by and for the next generation. Take the torch and leave your mark. Put your stake in the ground and build a future that you want and that you can believe in."

"No one ever expects to become a Medal of Honor recipient," she said. "But each of you, in or out of uniform, may be called upon to make a difference. And if this world is going to get better, it's going to be up to you."

She also urged them to embrace rejection, saying, "It doesn't define who you are. It will be your perseverance and your tenacity that people will always remember."

She reminded the graduates, "It's not about you."

"I've learned that you're going to be happiest, just in my humble opinion, when you practice simple acts of selflessness," she said. "Be proud of your accomplishments, in as much as they are the reasons you can take a look around and say that you left things a little better than you found them."

Cooke, who earned his Bachelor of Science degree in finance and an MBA from ODU, recalled his graduation 25 years ago at Foreman Field - and the irony of his role in Saturday's ceremonies.

"It was a hot day outside and all I could think of was, 'Gosh I wish that old dude on the stage would hurry up and finish talking,'" he said. "'So that I can get my diploma, get the heck out of here and go celebrate.'

"So now I find myself in the precarious position of being that old dude on the stage."

Cooke, a Newport News native who graduated from the former Ferguson High School, came to ODU dreaming of playing baseball for the Monarchs. But after his hopes were derailed by arm injuries, "I figured out I should find the inside of a classroom a little more often."

As the graduates prepare to move on to the next phase of their lives, he urged them to be independent thinkers.

"Be a person who listens and a person who unites," he said, alluding to the negative effect technology and social media can have. "Don't be swayed by the loudest voice in the room, but rather by the most rational and compassionate of ideas."

He also encouraged them to not be afraid to take chances in pursuing their dreams.

For Cooke and his wife, an oncologist, that means making family (they have two sons) their primary focus despite their demanding jobs.

"Remember that your career is only a piece of your life," he said. "Make sure that you're very intentional with your time and that you spend it with purpose on the things that you love most in this world." 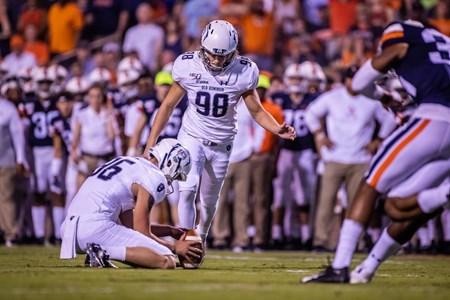 Class of 2021: Nick Rice Takes Care of Business on and off the Football Field

The record-setting kicker has earned his second degree from ODU, this one in business management. (More) 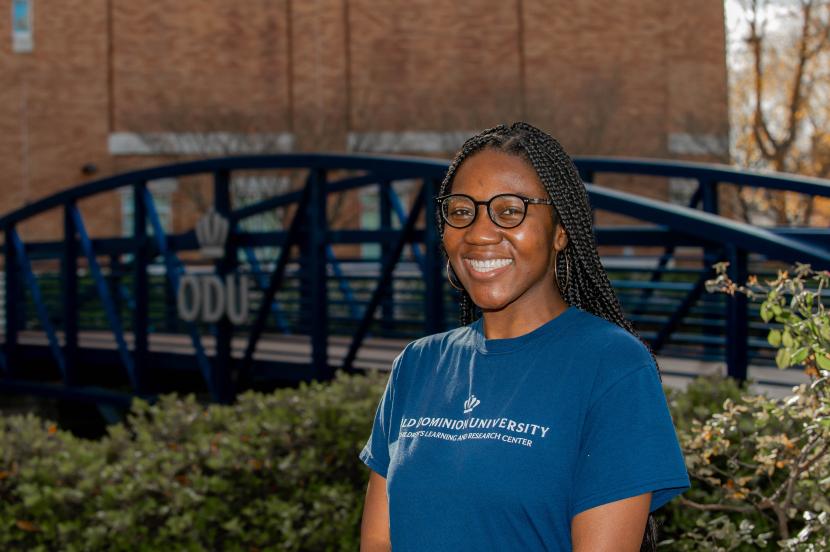 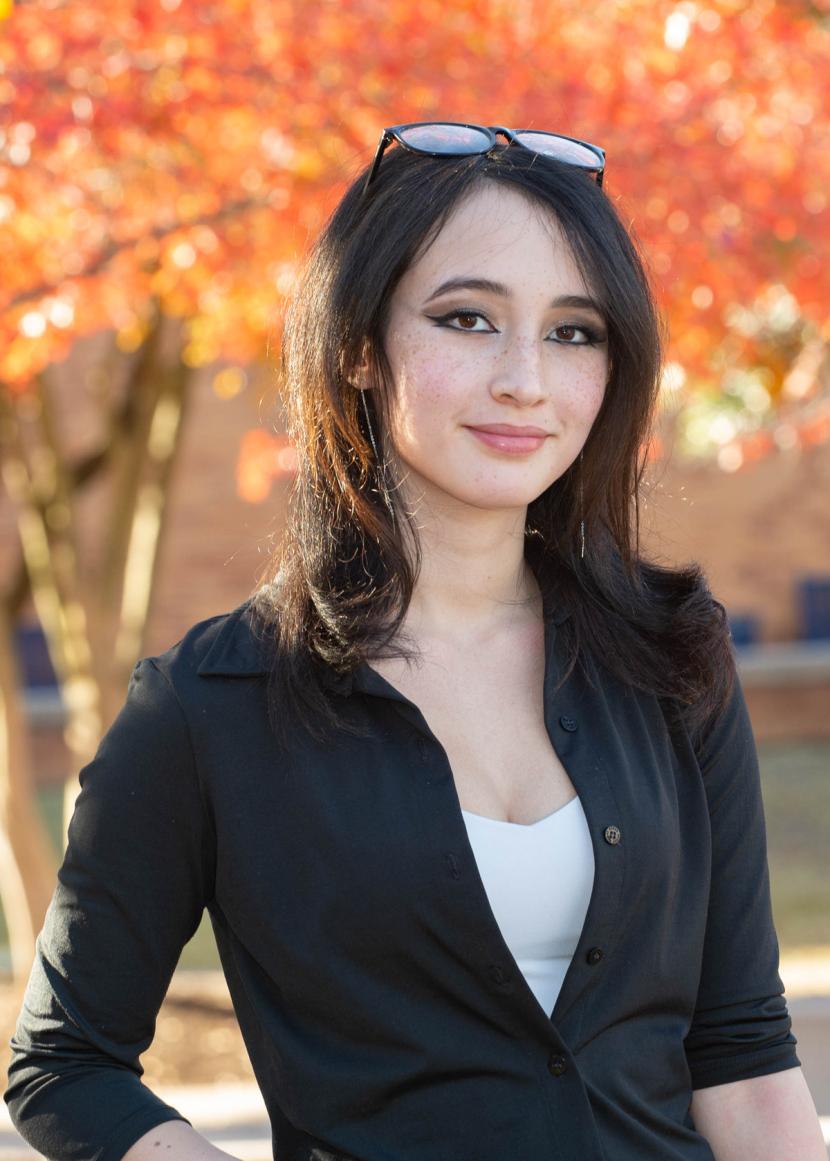 Jubilee Benedict drew motivation from her younger brother, who has neurofibromatosis. (More)