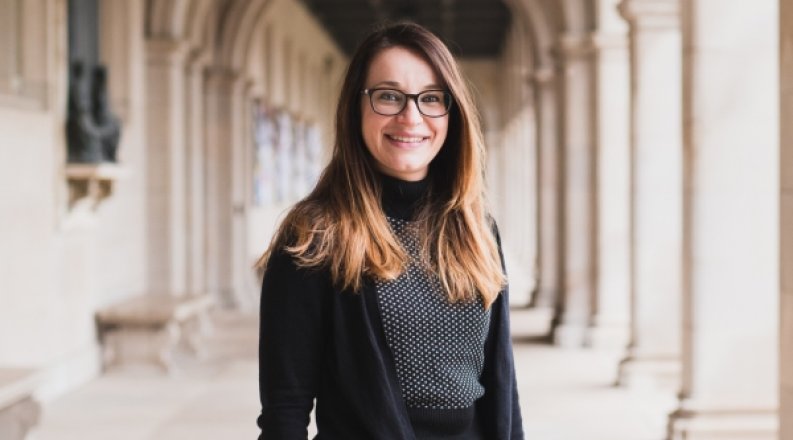 Piarulli, an assistant professor of physics in Arts and Sciences at Washington University in St. Louis, is a recent recipient of a U.S. Department of Energy Early Career Research Award.

Her journey to ODU started in Pisa, Italy, where she was working on her undergraduate degree in physics at the University of Pisa, one of the oldest universities in Europe.

"That year, there was a professor from ODU who was doing an exchange program at the University of Pisa," said Piarulli. She took ODU Physics Professor and Eminent Scholar Rocco Schiavilla's class because she was interested in nuclear physics. Her undergraduate advisor, Professor Laura E. Marcucci, was also a former ODU Ph.D. student mentored by Schiavilla.

"Maria took my class and did outstanding in the final oral exam," said Schiavilla. "As a matter of fact, I suggested to my colleague, Professor Laura Marcucci, that she should 'attract' Maria into the nuclear theory group there for a Master thesis, and then send her to us (ODU) for a Ph.D. in nuclear theory."

Piarulli completed her Bachelor of Science and Master of Science in physics at the University of Pisa. As she was nearing the end of her master's degree program, she was encouraged to continue her studies at ODU.

"I wasn't planning to come to ODU, but I saw an opportunity to do more research in physics with Schiavilla," said Piarulli.

Arriving in America was a complete culture shock for Piarulli, who had never visited the United States. "The first year was tough, my English was very poor, and everything was different," said Piarulli. "Coming from Europe, we have a perception of the U.S. that is a little bit distorted by the movies and the television shows."

By living with American roommates, she was able to get more immersed into the culture and after nearly two years, she finally felt acclimated.

"I felt like ODU admitted me to the Physics Ph.D. program, invested time and resources in me, and I felt the pressure to succeed and do all of the work," said Piarulli. "There were so many resources I was given as an international student, and I am very grateful for the opportunities."

Piarulli credits many people for helping her at ODU. "Gail Dodge and Eminent Scholar Lepsha Vuskovic and all of the faculty in the Department of Physics were very helpful," said Piarulli. They provided her with a laptop and all the support that she didn't receive in Italy. "All of the administration was great because dealing with international students was not easy. My experience was very positive, and Physics is a very strong department."

"In addition to being an excellent student, Maria was very active in the Women in Physics dinners that we held twice per semester," said Dodge, dean of the College of Sciences. "She was an important part of that community, mentoring other women, assisting younger graduate students and undergraduates, and generally adding to the supportive environment in physics. We are very proud of her success!"

With Schiavilla as her advisor, she worked on a project to develop nuclear models to study nuclear systems. Schiavilla has a dual position as a researcher at the Thomas Jefferson National Accelerator Lab (Jefferson Lab) and as a professor and Eminent Scholar in ODU's Department of Physics. Working with Schiavilla allowed her to do research at Jefferson Lab.

"I went to Jefferson Lab twice a week and it was nice to be involved in both the ODU and national research environments," said Piarulli. "The type of science that they do is impressive and there are many people linked to Jefferson Lab."

"She has done wonderful things at ODU, flourishing into a first-rate young researcher in academia," said Schiavilla.

Piarulli received her Ph.D. after five and a half years at ODU and immediately worked as a postdoctoral research associate at Argonne National Lab in Chicago, Illinois. After working at Argonne for three years, she was hired as a tenure track assistant professor at the Washington University in St. Louis.

"My field of expertise is theoretical Nuclear Physics," said Piarulli. "The main idea is to study nuclear systems such as atomic nuclei and infinite matter and to develop theoretical and computational methods that allow us to study these systems."

She was gratified to receive a U.S. Department of Energy Early Career Research grant. "It was a relief because it proves to the department that my research matters and people are interested in what I do and it is very competitive," said Piarulli.

As a professor, she draws from the cultural differences she observed as a student in both Italy and the U.S. In Italy, "you're just a number," and there are fewer opportunities to see if students are making progress on the material. In the U.S., she believes it's harder for students to fail because they are asked to complete regular homework and receive feedback.

She believes there are pros and cons to both learning styles. "In Europe, you become a little more independent, and you must organize your day and organize your study, but in America student progress is monitored and that is helpful," said Piarulli.

Her students at Washington University in St. Louis consider her to be tough. "I have this experience of both countries, and I try to merge them," said Piarulli.

Currently, she is supervising one Ph.D. student and co-supervising one postdoctoral researcher and another student in physics. She knows the road ahead for them may be challenging, but she makes sure she is a resource for her students.

She credits her success to ODU. "I would strongly recommend ODU to anyone; it's a positive environment, very supportive of students and you have a lot of resources," said Piarulli. "I loved being so close to the beach and living on the coast too." 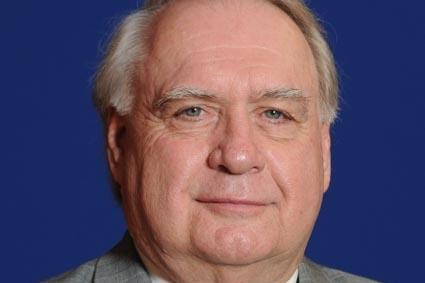 The associate professor of educational foundations and leadership was selected by the Student Affairs Administrators in Higher Education (NASPA). (More) 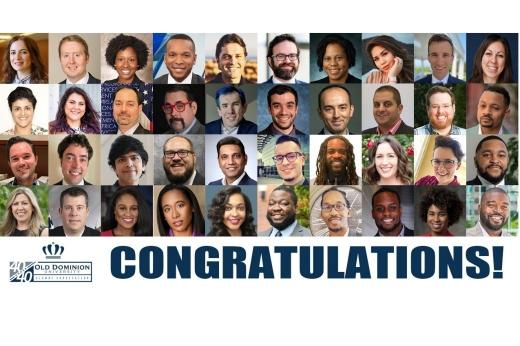 This is the second under-40 group to be honored, following the inaugural class in 2021. (More) 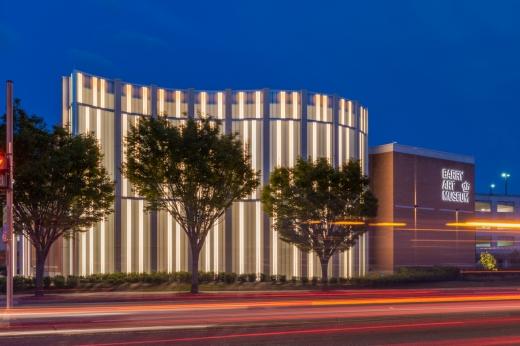 The works on view include a long-term loan by Ukrainian artist Jules Olitski and pieces from the “Strange Plants” series by Heather Beardsley. (More)