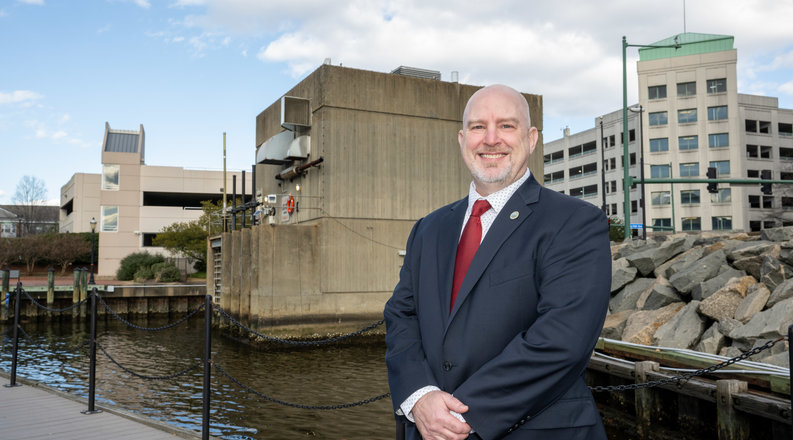 Jim Redick credits his time at ODU for his people-focused approach to emergency management.

“ODU’s philosophy has always been inclusive and focused on equity,” he said.

Redick, who earned a Master of Public Administration from the University, will now apply that approach at the national level.

In December, he was appointed to the Federal Emergency Management Agency’s National Advisory Council.

Redick, Norfolk’s Director of Emergency Preparedness and Response, is one of 16 new members who will serve a three-year term advising the FEMA administrator on all aspects of emergency management.

That includes preparedness, protection, response, recovery and mitigation for natural disasters, acts of terrorism and other human-made disasters, according to the FEMA website.

In his role with the city, understanding people and their mindset is crucial for developing effective plans for the entire community.

“If you have the resources, we expect you to make the right decision,” he said. “It’s the folks who don’t that we need to reach.”

Redick and his team work with other city agencies and community members to better understand the unique challenges different populations may face in an emergency.

For example, if a disaster happens at the middle or end of the month, people who receive Supplemental Nutrition Assistance Program (SNAP) benefits may have already spent their resources – making it harder for them to stock up on supplies.

Another barrier is distrust of the government. Certain populations may not heed an evacuation order because they don’t believe the threat is real enough or don’t trust the source.

“The pandemic proved we can get the message out – it just may not be acted on,” Redick said.

He said one way to combat this is to establish relationships with official and unofficial leaders who are already trusted in the community and who can help alert people. This could be a church leader or a popular person in a neighborhood.

As an emergency manager for Norfolk – with its rising seas and large military concentration –Redick brings an important perspective to the council.

“I can speak with authority and emphasize the impact of weather emergencies on national security,” he said.

Redick also teaches Emergency Management and Policy and Local Government as an adjunct professor at ODU. He said the most important thing he tries to impart to his students is the need to get out in the community and make people aware of available tools and resources.

“If we can help people meet their basic needs, we can then help them meet their disaster preparedness needs,” he said.