The survey included several questions that provide a window into the views of Hampton Roads citizens concerning policy choices and leadership during the COVID-19 pandemic response. Overall and on most issues the public was quite divided, with divisions often falling along party lines. But President Trump and the Centers for Disease Control and Prevention (CDC) seemed to elicit the strongest negative and positive responses, respectively. A substantial majority approved of Gov. Northam's timing on the initial stay-at-home order, and respondents leaned toward the view that additional restrictions on public activity should be imposed in their area now. 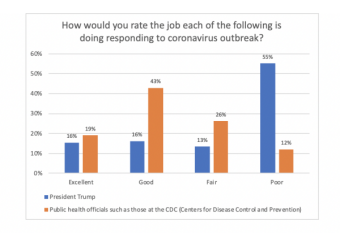 Opinion about the national government's response to the pandemic was split, with public health officials receiving relatively positive ratings and President Trump receiving decidedly negative ratings. When respondents were asked to rate the job being done by "public health officials such as those at the CDC," a majority (62%[1]) gave an "excellent" (19%) or "good" (43%) rating. About one in four (26%) gave public health officials a "fair" rating, and 12% gave a "poor" rating. Only about one-third gave President Trump an "excellent" or "good" rating (16% for each category). By contrast, 55% gave the president a "poor" rating on the question: "How would you rate the job each of the following is doing responding to the coronavirus outbreak?"

[1]Given the amount of data presented in some of the charts/graphs, some of the percentages have been rounded to the nearest whole number to improve readability.

One controversial issue in many states has been governors' decisions to impose and lift stay-at-home orders. Respondents were asked whether they believed the governor of Virginia had imposed the stay-at-home order too quickly, not quickly enough or with timing that was just about right. Very few respondents (14%) thought the governor imposed the order too quickly. Roughly twice as many (27%) thought that the order was not imposed quickly enough. A majority (59%) thought that "the timing was about right." 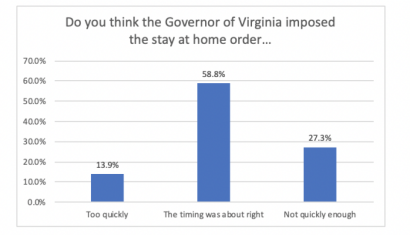 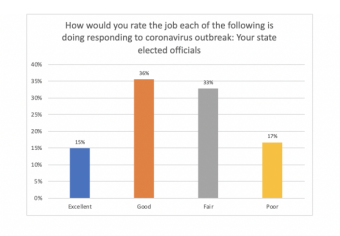 Opinion was slightly more divided but again leaning toward more caution about the decision to "move to Phase 1 of reopening nonessential businesses in May," with slightly less than one-fifth of respondents (19%) expressing the view that the move was not done "quickly enough," whereas 37% indicated that it was done "too quickly." Additionally, 44% indicated that the opening "timing was about right." 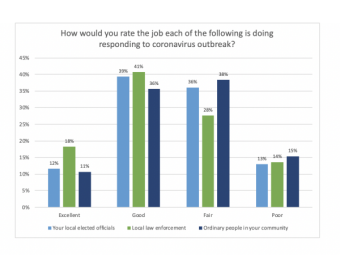 Respondents were somewhat less positive about "ordinary people in your local community," with only 47% giving an "excellent" (11%) or "good" (36%) rating and 15% giving a "poor" rating. 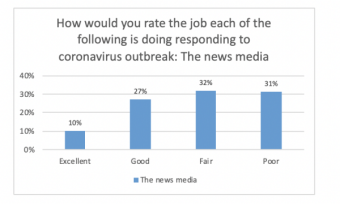 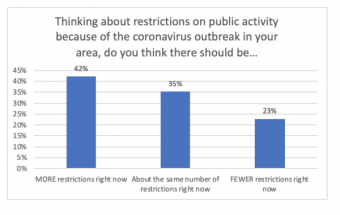 Detailed analysis: party, city of residence, and other factors 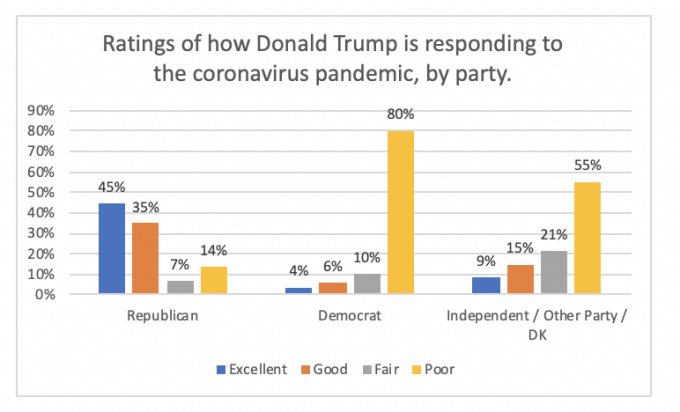 Ratings of President Trump's response to the coronavirus also varied by city, with low percentages of residents rating him as excellent or good in Norfolk and Portsmouth (21.4% and 20.8%, respectively) to higher ratings of 37.5% in Chesapeake and 37.8% in Virginia Beach. 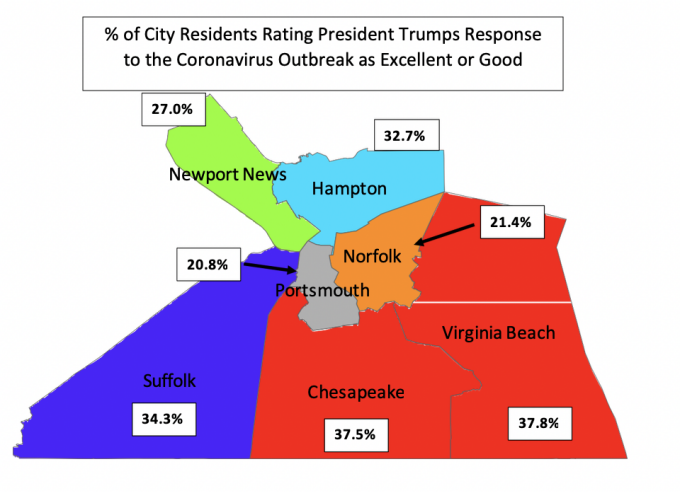 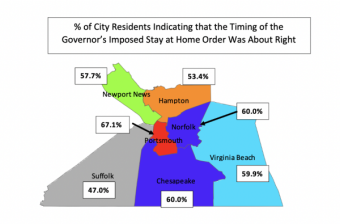 The residents of individual Hampton Roads cities reacted somewhat differently to the question of the timing of the state stay-at-home order. With the exception of Suffolk (47.0%) a majority of respondents in each city believed that the timing of the governor's stay-at-home order was about right. Other cities ranged from 53.5% in Hampton to 67.1% in Portsmouth. Respondents from Suffolk were also the most likely to assert that the order was imposed too quickly (21%), and respondents from Virginia Beach were the least likely to assert that it was not imposed quickly enough (22%). The difference between Virginia Beach and the rest of the cities is statistically significant. Suffolk was the most polarized, with the smallest portion (only 47%) responding that the timing was right, and larger portions indicating that the governor took action either too quickly or too slowly. 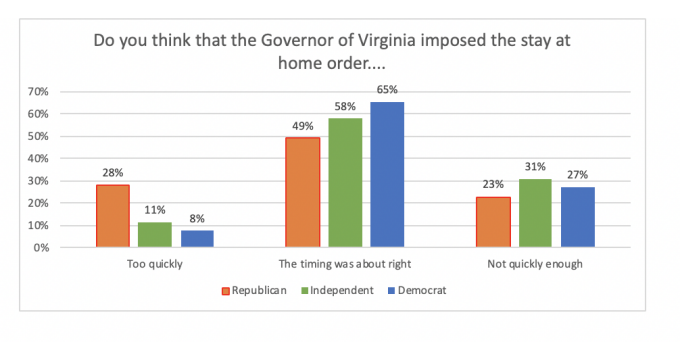 There was less variation across cites in terms of the governor's decision to reopen businesses, with a large proportion in each city believing that the timing was about right. This response ranged from 41.9% in Newport News to 46.4% in Norfolk. There were differences by city in concerns that the governor's decision was not quick enough. Respondents from Norfolk and Portsmouth were the least likely to believe that the opening process was not quick enough, and respondents from Suffolk were the most likely to assert that the opening did not proceed quickly enough. 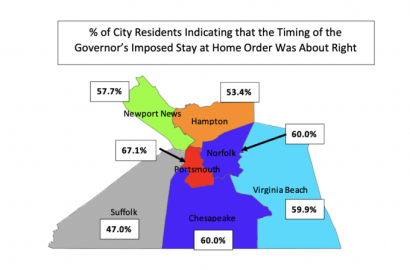 On the overall pandemic response job performance question, state elected officials received higher marks from Democrats than from other groups. Republicans and independents, on the other hand, were more likely to give negative evaluations of fair or poor. 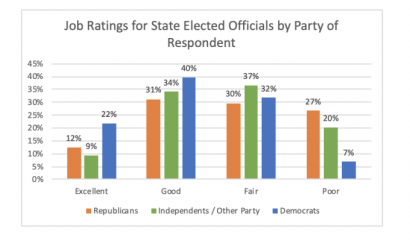 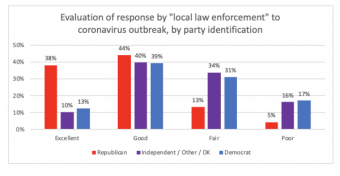 Response to local city leadership also did not vary systematically by party, but evaluation of the job being done by "local law enforcement" in response to the COVID-19 pandemic was divided sharply by party. While 38% of Republicans gave an "excellent" rating, only 10% of independents and 13% of Democrats gave excellent ratings. This likely reflects broader polarization of attitudes toward police on party lines that are reflected on a variety of other questions in the survey.

Ratings of local law enforcement also vary significantly across the cities of Hampton Roads, and the differences are quite dramatic. Less than half viewed the response to the coronavirus as either excellent or good in Portsmouth (45.8%), and it was as high as 64.6% in Virginia Beach and 70.9% in Chesapeake. 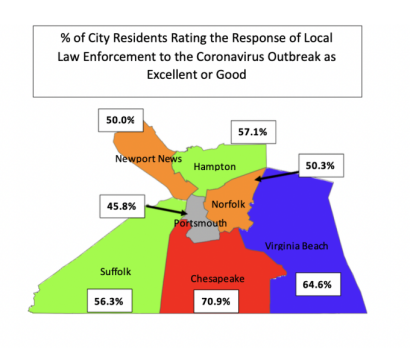 Republicans were also much more likely to report that it was difficult for them to determine what was true than Democrats, though even among Democrats, 44% indicated that they had difficulty. 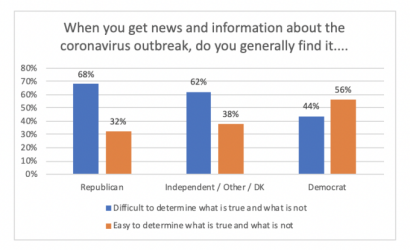 Respondents were equally divided concerning the question of what sort of emphasis should be placed on the coronavirus outbreak. As one might expect, views on this question were strongly associated with party identification and views of the media. Those who thought that the media had done a poor job of covering the pandemic tended to think it had placed too much emphasis on it. And a majority of Republicans indicated that the pandemic had been made too much of, while a plurality of Democrats thought that it had been "made a smaller deal than it really is." 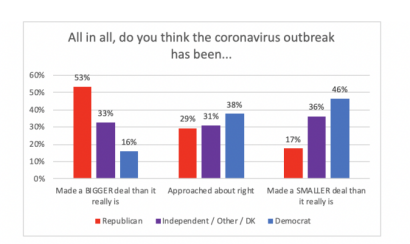 Personally knowing someone who has contracted COVID-19 had a modest impact on views concerning the response to the pandemic, although those who know someone who has had the virus were modestly more likely to think that the pandemic has been made a smaller deal than it really is. 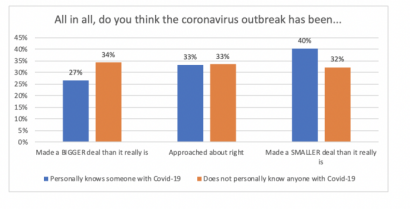 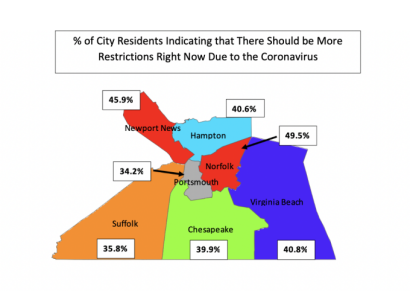 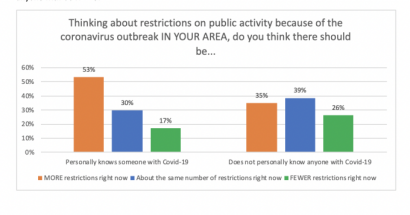 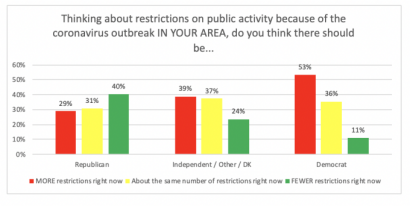