Class of 2022: For Writer, Scholar, Athlete, a New Chapter Awaits 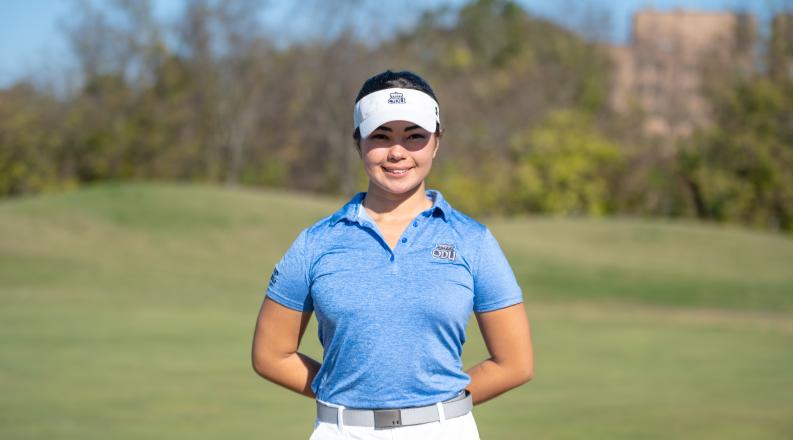 Growing up in Japan, Leah Onosato learned to play golf with her father. He was new to the game himself, and it was a way for them to bond.

“Golf was more for my dad,” Onosato said. “He liked doing it with me.”

But she warmed to the sport, and by middle school she had won her first tournament. As her skills grew, so did her competitiveness and ambition. In January 2019 she boarded a flight to America, where a golf scholarship awaited at Old Dominion University. This December the standout student-athlete will reach a milestone in her academic career when she receives her Bachelor of Arts in English. 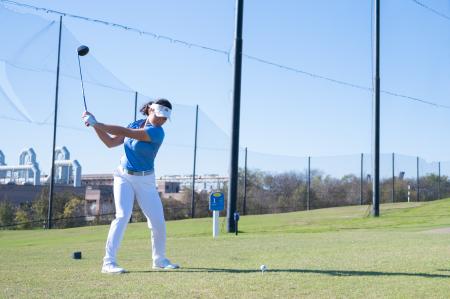 “I came to ODU more for golf than for college,” she said, “but then I realized how much I like studying.”

She carries a 4.0 GPA and is enrolled in a linked B.A./M.A. program that allowed her to begin taking graduate courses as an undergrad. She hopes to finish her master’s in applied linguistics in spring 2024.

“Leah took one of my M.A. courses as an undergraduate and was one of the strongest students in the class,” Associate Professor of English Staci Defibaugh said.

Onosato has excelled on the golf course as well. At the Lady Palladin Invitational in Greenville, South Carolina, in September, she shot a six-under 70-71-69 (210) as the ODU women’s team took second place. Over her career, she has been named to the All-Conference USA second team and Virginia Sports Information Directors (VaSID) All-State first team, the Conference USA All-Academic first team and the VaSID Academic All-State team.

“She’s an incredible student-athlete,” said Mallory Kane, coach of the women’s golf team. “She represents a diverse family, she strives for perfection in the classroom, she’s involved with a variety of campus groups and she’s an award-winning golfer. We hope all of our prospective student-athletes will look up to Leah and model their career after her.”

Onosato said her best attribute on the golf course is her determination.

“I keep going till the very end,” she said. “I have a dedication to seeing it through. I’ve always been competitive, in golf and in school.”

Born in Saitama on the main Japanese island and later raised in Kumamoto Prefecture on a sub-island to the south, Leah was home-schooled by her American mother. The girl grew up speaking mostly English with her mother and three siblings and mostly Japanese with her father.

“His English is fine, but my Japanese is better than his English,” Onosato said.

Based on her success in golf – she qualified at ages 16 and 17 for the Junior World Championship in San Diego – she envisioned earning an athletic scholarship and going pro. But golf isn’t as much of a college sport in Japan as it is in the United States, so she explored what it would take to play and study here.

For one thing, she needed to become an American citizen. Her mother helped steer her through the complicated process, and they flew to Guam – the nearest U.S. soil – for the swearing-in ceremony.

With scholarship offers from ODU and other universities, Onosato chose to move to Norfolk. Old Dominion had the highest-ranked golf program among those schools, and she liked the coaching staff.

For her studies, she decided on a creative-writing concentration. She had always been a reader, of fiction especially, and had written stories. Once she got to Old Dominion, nonfiction and poetry beckoned too. These days she's turning more to the latter.

“Poetry is more raw and personal and something I can write more often and use as almost an outlet for any emotions.”

“Leah is that rare student whose talents are so extraordinary that a single field can't contain them,” Wascom said. “An athlete, a scholar and a writer, all at an exceptional level.”

Over time, academia assumed a bigger place in Onosato’s mind as a career choice. She began rethinking turning pro.

“College golf is fun, but professional golf is a different world and I don’t think I would enjoy that as much,” she said. “It would take some of the joy out.”

Onosato is making the transition to graduate studies in applied linguistics, where her concentration is teaching English to speakers of other languages.

She wants to teach at the college level, either linguistics or a related subject. A recent course in Teaching College Composition got her interested in the field of writing studies.

“I’ve always loved writing and reading. The idea of helping people with writing and the idea of teaching writing is really cool.”

One reason for this interest is that many of her college friends are, like her, international students.

“Having English as my first language made it a lot easier for me than a lot of my friends. I feel like there are so many ways that college could work toward helping those who are second language or multilingual and just embrace them more.”

Recently named Outstanding Scholar for the College of Arts and Letters, Onosato will carry the A&L banner at commencement on Dec. 17. She knows her faraway family is proud.

In a way, her journey started with that first outing with her father.

“Golf kind of brought me here. This is all something I couldn't have done without that. It’s cool to think about how far it’s brought me.”