Class of 2022: Chloe Smith Maximizes Research to Unlock Path to Future in Science 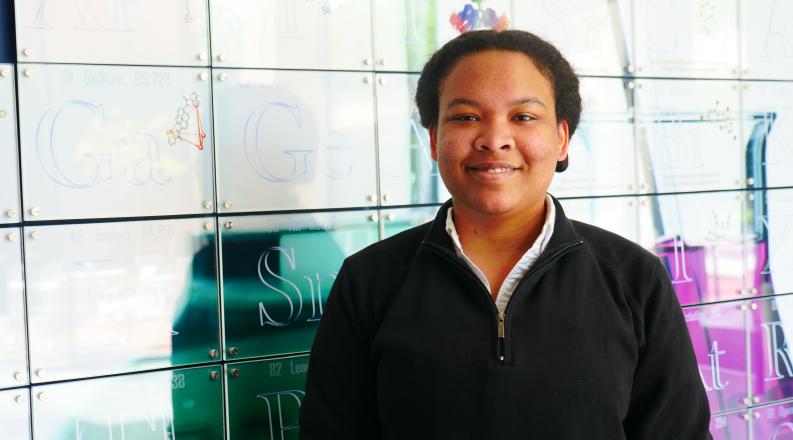 Chloe Smith will graduate from Old Dominion University spring 2022 with a Bachelor of Science degree in Biological Sciences. Choosing to be a Monarch was the easy part because she always wanted to attend ODU, but little did she know an encounter during freshmen orientation would take her on a path involving research that has unlocked her potential for a future in agricultural science.

Upon graduating from Glen Allen High School in Glen Allen, Virginia, Smith received a scholarship to attend ODU. She knew she was in the right place, but selecting a major wasn't obvious at first. "Originally, I was interested in majoring in engineering because everybody in my high school was telling me that ODU is a good engineering school," said Smith. However, once she went to orientation, she quickly realized she had to make a change. "I thought about it for a few seconds, and I was like, I'll just try biology, and it worked out."

She attended freshmen orientation at Chartway Arena after which science majors were sent over to Mills Godwin Building where Alvin Holder, professor of Chemistry and Biochemistry, and Joshua Wallach, associate dean in the College of Sciences and master lecturer of Chemistry and Biochemistry, gave a presentation about undergraduate research. "I emailed Dr. Holder on the first day of my semester, and he told me to always talk to my professors," said Smith. On the second day of her semester, she attended her first biological sciences class taught by Professor Douglas Mills.

Adhering to Holder's sound advice she made connections with the faculty. "I talked to Dr. Mills after class and that began our, like, professor-student relationship for the next two years of my college experience," said Smith. They always talked about her options and ways to get involved in undergraduate research.

Research kept coming up in all her office hours meetings. She attended an ODU Maximizing Access to Research Careers (M-MARC) meeting led by Holder and Desh Ranjan, professor of computer science, who are co-principal investigators on the National Institutes of Health grant for the M-MARC program. "At the meeting, Dr. Holder told me that there's also other opportunities in biology careers like medicine or research and that's why he was steering me towards getting a Ph.D. and do research," said Smith.

Smith applied to the M-MARC Program and was accepted. "Chloe is the model student, who, from a freshman to senior had the passion to overcome the odds and blossomed with time," said Holder. "She is a mentee who is a joy to mentor with minimal supervision and I can always consider it done with her and done right the first time!"

After her freshman year, Smith went to the University of North Texas Health Science Center in Fort Worth to do research related to pediatric oncology in Riyaz Basha's lab. "I was working on finding fewer toxic agents to sensitize neuroblastoma, high risk neuroblastoma cells, which is pediatric cancer," said Smith.

At the completion of her sophomore year, she applied and was accepted to Purdue University's summer research experience. However, COVID-19 put an end to those plans because the university did not hold the program due to safety concerns. Researchers from Purdue did agree to hold her spot until the next year. "I worked in the Briggs lab and looked at the effects of removing certain epigenetic factors in fungal cells and what effect they have on their ability to handle oxidative stress," said Smith. "I got to do a lot of epigenetic research, which I have never done before, and just genetic research at all and that was very fun." Epigenetics is the study of changes in organisms caused by modification of gene expression rather than alteration of the genetic code itself.

Smith used that research to present at the annual Biomedical Research Conference for Minoritized Students and Scientists during the 2021 fall semester. This is a nationwide conference for biomedical research for undergraduate and graduate students. She presented her epigenetics research at the conference.

Giving presentations are a core requirement of being in the M-MARC program. "The importance of presentation skills can't be overstated," said Ranjan. "It is important for the scientists not only to communicate their research discoveries to other scientists but also to be able to present it in an understandable fashion to the general public so that the scientific research would continue to have their support."

After applying to six graduate schools, she started getting rejection letter after rejection letter and doubted herself and all of her hard work. However, the last school she applied to, Cornell University, responded with good news, and she was accepted into their doctoral program.

"I am really excited that Chloe would be going to Cornell for her Ph.D. because that's where I completed my Ph.D. in Computer Science three decades ago," said Ranjan. "I hope that Chloe would take full advantage of all that Cornell has to offer in all regards and wish her all the best in her graduate program."

The M-MARC program has opened doors for Smith that she never imagined. Smith will begin Cornell's Ph.D.'s program in the fall to study agricultural science.

"Dr. Holder was a real key player in my decision to apply there (Cornell) because I wasn't thinking past college when I met him, and he was immediately telling me to think past college," said Smith. "But he was looking out for my future."

Smith is appreciative to everyone in the M-MARC Program. "They put a lot of emphasis on exposing young students to research opportunities," said Smith. "I was able to utilize the time that I had here to the most of my ability and I don't really know if I would've had that opportunity at other schools because the M-MARC program is not necessarily at every school.